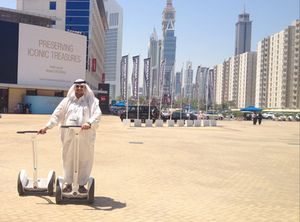 Want to get around in all this heat?

No, this is not actually one of the 663 delegates arriving to Dubai’s annual Arabian Hotel Investment Conference (AHIC), held, as always, at that luxury hotels complex, Madinat Jumeirah, May 4-5, 2014. In fact nearly everyone was either staying at Mina A’Salam, the hotel literally just across the road, or they arrived by limousine (stay at the new Conrad Dubai and you could borrow a Maserati). The gal cannot remember what she arrived in, but she knows it was neither on a Segway nor a two-wheeled Scott. 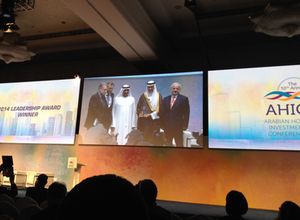 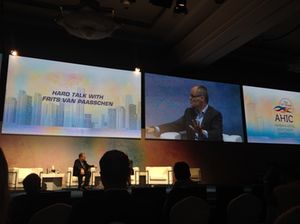 One of the most insightful interviews featured Starwood’s Frits van Paasschen, who obviously could not remember who I was as he glanced down at my name label when we were speaking afterwards – I had actually been co-interviewer at the keynote presentation at the Berlin show a mere three years ago, when he was pretty roughly interrogated, especially over Starwood’s private jet. Anyway, no worry, one or two others recognized me, including Kempinski’s David Sparrow, who shared a privacy-separator with me on the British Airways plane coming into town. 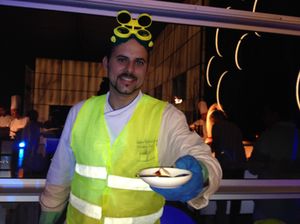 The atmosphere of any serious conference like this has changed. No mobile phones ring but at any one time, at least 60% of delegates are working their smartphones/tablets (who knows if they are making notes, answering emails or what). Another innovation this year was Jumeirah’s first-night party, held not at Madinat Jumeirah but on the Palm, at Zero Gravity, a two-floor entertainment centre that they run, without their name on it. After drinks and a couple of speeches downstairs we all moved up, to get out on the blue dayglo-highlighted balcony to watch the stars, and to stay in for spectacular displays of edible art, including making molecular canapés and hamburgers. 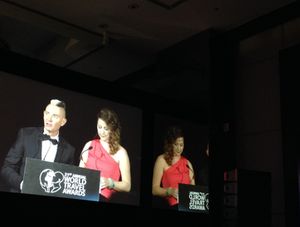 After that I sped in a Jumeirah limousine to the J.W. Marriott to make a spectacularly late appearance at the World Travel Awards WTA regional gala. How nice to find an event that is truly black tie – around me, at least, there was no-one who had not taken trouble to dress up (around my table were the Chief Commercial Officers of Europcar, who had come in from Paris, and of DP Ports, which runs a staggering 65 ports around the world, with Dubai the biggest, at 16.5 million containers a year). Even the presenters, Mark Lloyd and Lucy Taylor of Dubai Eye 103.8FM, appeared to have taken trouble over their appearance, or at least one hair-do. 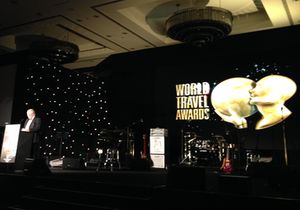