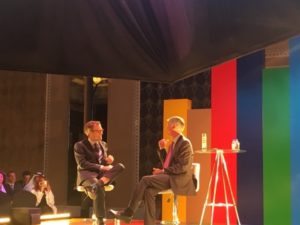 ‘Catalysts of Change’ was the title of this year’s annual Arabian Hotel Investment Conference AHIC, which deliberately coincides with Arabian Travel Market ATM and thus conveniently dovetails in with ILTM Arabia. Like many of the luxury hoteliers there, the gal was able to rush around Dubai, from ILTM Arabia to AHIC, (though it would have helped to have had a personal air taxi). The first full day of AHIC was a surprise. For the first time, it was in the round, which could have meant that some people only saw the backs of heads of such participants as conference organiser Jonathan Worsley and his opening keynote speaker, the President and CEO of Hilton, Chris Nassetta. No problem. Above the podium were four large, like four feet by ten feet wide, screens showing real-time action. 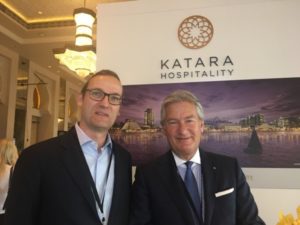 Also introduced this year was ‘AHIC’, a robot from conference sponsor Isukoshi (it looked like a twin of IBM’s Watson, whom I first came across at Hilton’s ITB party in Berlin, March 2016). Here ‘AHIC’ – called throughout a ‘she’ – introduced a few things, and was funny at first but fortunately it then stood motionless on one corner of the podium. There were over 700 real-live delegates this year, from all over. Jurgen Baumhoff, who now, as CEO, Metapoint Advisory, has one leg in Geneva, the other in Perth (the Australian one). Philippe Zuber, who now, as COO, is more than ever the big-big boss of One&Only Resorts, introduced new brands, namely One&Only Nature Resorts, One&Only Private Homes, One&Only Urban Resorts. One&Only, by the way, held a corporate party the first night of AHIC but it was way out at One&Only The Palm and I could not get to it. 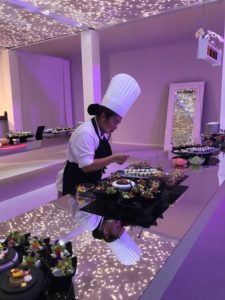 That night, too, Jumeirah hosted two magnificent events. One was on the terrace of Burj Al Arab – now billed as The World’s Most LUXURIOUS Hotel – where electronically-synchronised musicians included a standing harpist playing inside a transparent air-filled balloon, and the superb eat-and-drink-selection included Burj Al Arab’s own-labelled wines. The other, simultaneous, party was at Madinat Jumeirah’s Mina A’Salam, where Madinat’s creative Bavarian chef Dirk Haltenhof excelled himself yet again. He did, for instance, a conveyor belt, where dishes and ingredients went into the security-type belt’s tunnel one end, and came out the other – see a video, below. The next night of AHIC saw Emaar Hospitality Group CEO Olivier Harnisch hosting at The Address. As always with this conference there were so many memorable session pointers. Erik Saelens, founder of Belgium-based Brandhome Group, showed how a product can be branded. A service can not, and 54% do not trust any brands now, anywhere, and across all categories of life most can only name maximum 100 brands – he showed famous logos without the words, say a green background with a cup of coffee on it, and the Marriott logo-name but with double-dutch instead of the letters. 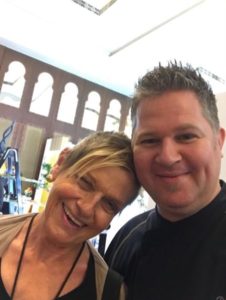 Another amazing speaker was former Hilton and Rotana long-timer Imad Elias, now CEO Roda Hotels & Resorts. He managed to rubbish hotel brands, full stop, and produced the laughs of the conference. Yes, this is definitely an event that luxury hoteliers should put in their diaries now, for 2018.

Now see the video, below