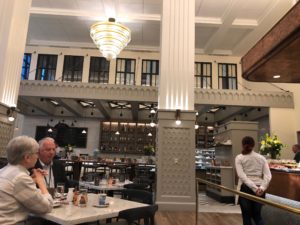 Luxury hoteliers were in San Diego’s clever new Pendry hotel for the global gatheriing of Preferred Hotels & Resorts, April 30 to May 4, 2018. It was a clever venue, says the gal, as all 350 delegates could be housed in the same place, and the meetings were held there too. The days started, indeed, in Provisional, one of the hotel’s five street-entrance restaurants that all attract masses of passing traffic.  And then, after plates of fresh berries and other fruits, and, it seemed, whatever else you wanted, we moved to the Ballroom for main sessions. 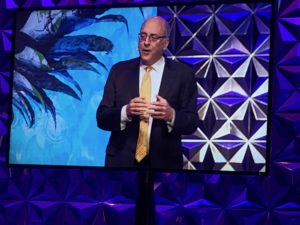 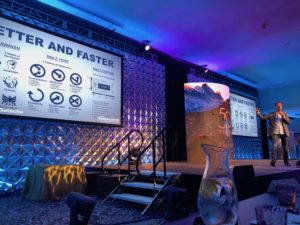 Another really valuable talk was given by Steve Rudner, Hotel Lawyers, warning of the pitfalls of MICE contracts – do owners/gms know what sales staff sometimes sign? He quoted a Maui hotel, unsuccessfully suing a client who cancelled, for over $1m: the client claimed a small amount of retiling in another part of the hotel constituted ‘renovation and construction’ (the answer is to make sure the contract specifies ‘no renovation or construction in areas relevant to the event’) – and remember too that ‘change of management’ can include the salesperson who signed the contract moving on, and lowest-rate guarantees can be breached if you have even one hotel-employee-rate room taken, and ‘confidentiality’ leaves the hotel vulnerable if a banquet server photographs a Google meeting document to sell to Samsung…  GPDR, which comes into force May 25th, 2018, is, in his view, a moving crisis. 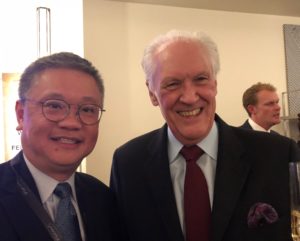 The fact that Champagne Laurent-Perrier was a main sponsor came in very handy for the opening reception, which I sadly missed, and also for the final banquet.  This was the occasion for awards.  Hotelier of the year is Salamander president Prem Devadas, and lifetime achievement accolades went to Rob Cornell and Onno Poortier. Hotel of the year is Malaga Finca Cortesin, with regional winners Boston Harbor Hotel, US-Canada; Cancun NIZUC, Latin America-Caribbean; Amsterdam Pulitzer, Europe; Bengaluru Leela Palace, India-Middle East-Africa; Tokyo Capitol, Asia-Pacific (and new-member hotel of the year, Mykonos Myconian Villa Collection). iPrefer loyalty members’ hotel of the year Geneva Metropole, and hotel group Swire Hotels: #ThePreferredLife social media hotel is Montage Palmetto Bluff. Hotels were nominated by regional directors, using inspection scores as a guide: shortlists compiled by EVPs were then submitted to the main award committee. NOW SEE  VIDEOS OF BREAKFAST, AND THEN DAY TWO OF THE MEETING