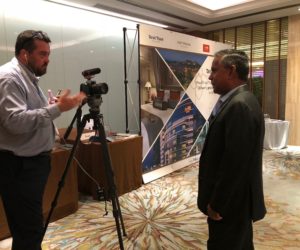 There are so many reasons for luxury hoteliers to gather together – this very week, for instance, all InterContinental area directors networked in Dubai.  This next week there will hundreds of luxury operators in Singapore for the first-ever ILTM Asia-Pacific.  And then there are investment conferences, sometimes gatherings of be-suited men who never smile. The gal was delighted to find that the second South East Asia Hotel Investors’ Summit SEAHIS did not fall into that category.  Serious business was interspersed with real friendliness and continual laughter – and not surprisingly there was a chance to reconnect with such long-time friends as Andrew Steele (above), the former Shangri-La lifer who now heads a company called The Potato Head family. 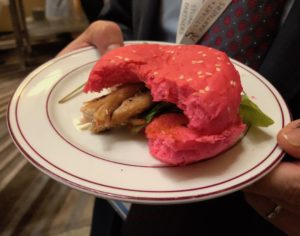 This delegate wanted a hamburger pink

There were 250 delegates at SEAHIS, held May 14-15, 2018 at Westin Grande Sukhumvit – and well done to the hotel, who arranged quick WiFi everywhere, and breakouts and meals that included a lunch buffet with an outstanding sashimi station, and made-to-order burgers with your choice of black, pink or yellow buns. It was meticulously organised by Simon Allison, Chairman of HOFTEL, set up specifically for owners, to allow them to level the playing field when dealing with brands, OTAs, banks and sharing-economy entities. The invitation-only organisation has 82 members, who incudes such names as Blackstone, Host, Sun Hung Kai, Swire and other significant players. 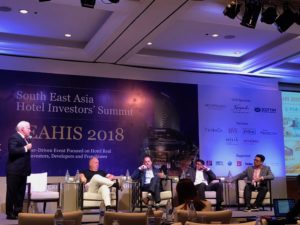 Australian lawyer Tony Ryan is honestly the most charismatic, and professional, moderator in the business. In a one-to-one session, Taj’s Puneet Chhatwal explained his reason for continuing with multi-brands: luxury-only would impede growth, and luxury has lower margins, which stock exchange does not like – and, in addition, there is a legal obligation to give owners the brands they originally signed. In general Vietnam seemed to be a hotspot. Many speakers said they had never, despite government and visa challenges, seen anything like its growth (it has taken a mere eight years for incoming visitor numbers to rise from six to 15 million, and in addition domestic tourism has seen 18% growth in the last year). 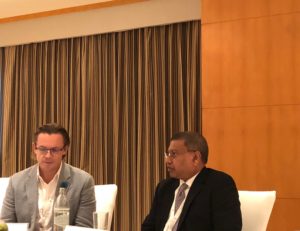 Maldives incites jealousy from elsewhere, although Centara’s Markland Blaiklock did  boast there are some Thai resorts that can command $1,500 average rates. High charges, said Mark Hehir, Small Maldives Island Co, are boosted by demand for the exclusivity of all-island resorts, and rates are necessitated by exorbitant construction costs. Excluding land reclamation, typical luxury resort development cost is about a million US a key: one resort is currently being built, prefab-style, in Singapore, to be shipped in, but containers might still be delayed, say for a month, waiting to get into Malé port, which distorts planned budgets. Now I am looking forward, already, to the 2019 SEAHIS, to meet more owners and operators of luxury hotels and resorts – Simon Allison says the exact date should be finalised soon.