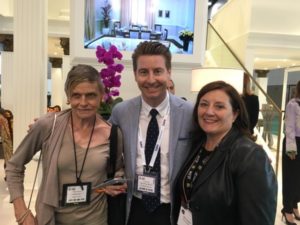 There was every reason in the world for the gal to change plans and head to Dubai. Why? Top magnet was the launch ILTM Arabia, introducing the 20 luxury hotels and experience companies interested in courting business from GCC countries to those nations’ top travel advisors. That is why Amanresorts, Conrad, Montage, One&Only, Small Luxury Hotels of the World and Waldorf Astoria leaped at the chance to be part of it all, alongside individual properties of the calibre of North Island, Raffles Istanbul and Velaa Private Island. ILTM’s Portfolio Director Alison Gilmore had showed her design flair in helping conceive the really stylish ILTM Arabia lounge, above. 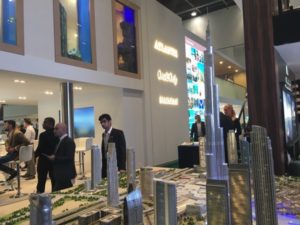 The ILTM Arabia corner certainly provided respite from the crowded hurly-burly that is the annual Arabian Travel Market ATM – both are owned by Reed and ILTM had one corner of ATM. As always, ILTM also gave exhibitors proper talk-time with the advisors. I thought this list, all from GCC, showed much more flair than I had mistakenly imagined. One told me, over an ILTM Arabia lunch, how he had recently organised a Mongolian safari for clients from Saudi Arabia. They used local horses, but he, the advisor, had to design, have made and then service, luxury sleeping yurts along the entire trek, and chefs and other support staff had to be flown in, too. 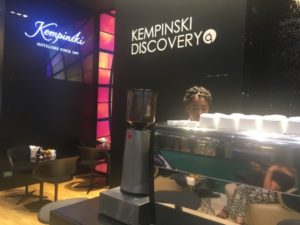 During my stay at ILTM Arabia I did manage from time to time to see what was going on at ATM (yes, it was even more lively than last year, said some habitués). The big hotel groups have the same two-floor mega stands that they used to have at ITB in Berlin. Although some have given up on that particular show, no-one gives up on ATM as EVERYone wants to make and retain relationships with the growing and high-powered market out of this part of the world. I also had a good chance of seeing what some of the exhibitors are actually doing. The shared Atlantis, Mazagan and One&Only stand, for instance, was able to display all the present and new hotels coming up (I had had a lovely breakfast with Atlantis’ global COO at Atlantis The Palm Dubai, just before he flew to Hawaii to check on the Atlantis that developer Jeff Stone is doing at Ko’Olina). 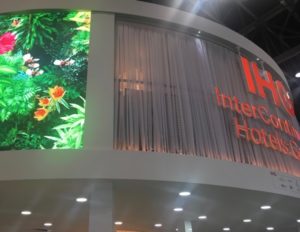 And as always it was great to see my own long-term relationship buddies, on all the main stands. Paramount’s Thomas Van Vliet, under crystal chandeliers that seem to be a signifier of that future brand, in fact has a hotel opening any day now – he is taking over management of the former Jumeirah Bodrum, which is opulent enough for anyone, I would think, other than the conceptors of Macau’s 13, which will be luxury taken to infinity when it opens. There were lots of steady, reliable names, too: IHG has been in this part of the world since the opening of Dubai’s InterContinental Hotel, on Deira Creek, over 40 years ago. Yes, relationships are essential when it comes to luxury hotels. After just one ILTM Arabia, this event has already slotted into that pattern.