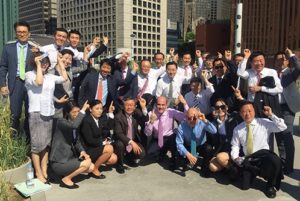 Eric Swanson, in pink shirt, with some of the hotel’s 550-strong team

Eric Swanson, seen on the far left of the image above, was given the Tourism Minister of South Korea’s Award for Culture, Sports & Tourism.  Since the highly-experienced Eric Swanson joined the 673-room Millennium Hilton Seoul as GM in 2006 he has, says Do Jongwhan, Minister for Cultures, Sports & Tourism, South Korea,  has continuously been an exceptionally good fit for the hotel due to his personal background, business acumen and dedication to the service industry in general.

Eric Swanson is half-Korean (his mother, Cho Chang Soo, was curator, Korean and Asian culture, at the Smithsonian in Washington DC) and during his time at Millennium Hilton Seoul he has immersed himself in such local philanthropy as supporting Hyesimwon Orphanage. He gained a PhD in Business Administration – his dissertation was on ‘Chain hotel expatriate GMs’ competencies on knowledge sharing, job performance and employee loyalty’. He is married to media star Jeon Soo-Kyeong (SK).