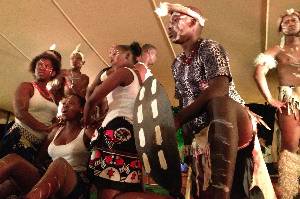 At every good conference there is an evening out, so to speak.  Something that is different.  This was certainly in the plans for the 2012 Leading Hotels of the World convention in beautiful Cape Town.

What do you do with 250 owners and managers of some of the top luxury hotels in the world?  You take them to an ostrich farm.  The gal went too, even though she was cautioned by Her Man not to let an ostrich run away with her.

As it happened we may have been at West Coast Ostrich Farm but we did not see a single ostrich.  You can see’em, anyway, in zoos and on safari. You can only see the authentic and vibrant dancing of South Africa in – South Africa. The gal had a fabulous evening watching what could only happen in Africa. 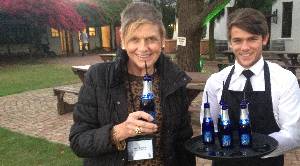 Pommery champagne pops are there to welcome

We were on the Kanigowski family’s ranch twenty minutes’ drive north of Cape Town, on the sea-facing slopes of the Durbanville Hills.  I guess that Gavin Kanigowski and his son Pawel do still farm ostrich (I find out that ostrich chicks were exported from here even to such faraway places as Tokyo, as the then-Emperor of Japan wanted some, in 1658).

Tonight the Kanigowskis, and Pommery champagne and its owners, the Vranken family, welcomed us all with Champagne Pops followed by a Boma.  Now the word ‘boma’ in fact means a livestock enclosure, or kraal, but today it has come to mean an African party with lots of singing and dancing, and that is certainly what we had, all 300 or so of in whatever African or safari gear we could muster. 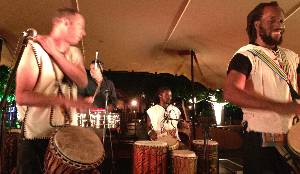 When we got in under the giant awning that held all of us and more, we found long tables set with all the necessary for a good night’s dinner – plus individual bongo drums on each seat.  On the stage, The Drumming Guys‘ lead guys started drumming, getting us involved too.  It was impossible not to feel the rhythm and take part, and drum this, drum that.

The guy with the Rastafarian hair then took his coloured shirt off and then his undershirt so he was down to bare top, but he never stopped.  We stopped.  Our drumming was not up the professionals’ par and anyway, most of us wanted at least a sip of wine. 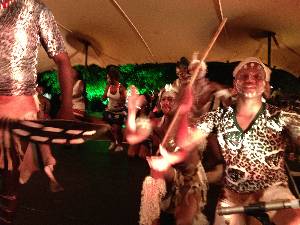 It shows the amazing generosity of the Tollman family, who own Bouchard Finlayson, in entertaining us with such style. And then the dancing started.  Other guys appeared, and girls who were all muscle.

You might not want to tussle with them in the middle of the night.  The beat, the rhythm made such a noise if there had been any ostriches around they would have been frightened out of their wits, honestly. 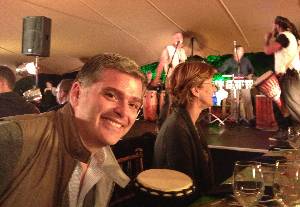 I was with good friends from all over – put the boss of a top Paris luxury hotel in a safari suit and it is almost as if that is what Hermès has decreed is highest fashion.  Safari gear does, in fact, look extremely appealing, on the right body.

Some of the food was not honestly appealing to the body-conscious.  The massive barbeque buffet included pumpkin fritters sprinkled with cinnamon and sugar, and sweet potato drizzled with honey.

There were also warthog meat balls, and Karoo beef fillet, and Karoo lamb chops (many years ago we drove from Cape Town north to Johannesburg, right across the Karoo, and cooked with a swani brai, barbeques made from collapsible metal dustbins, light some newspaper, flames soar up, fat from our steaks pours down, gosh the steaks tasted good). 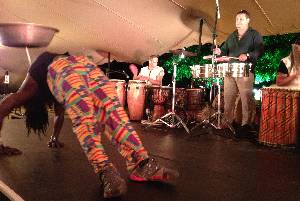 Mr Rasta balanced swirling pots from both hands and, as here, his head..

All the while we watched Mr Rastafarian in action.  He did somersaults on the stage, off the stage, back on the stage.  As we ate our rooster warmed with farm butter and apricot jam, and decadent pecan and chocolate tortes, and syrupy koeksisters (hey, what they, gal? – egg and butter dough, fried, and served with cinnamon and sugar syrup).

As we consumed, he used up calories at a rate of knots.  He twirled one metal pan atop a stick in one hand, and managed another in the other hand, and then a third one on the top of his head. He practically lay flat at some point.  The crowd roared, egged him on.  He must have used up more calories even than a session with Nathalie at Bodyism in London. 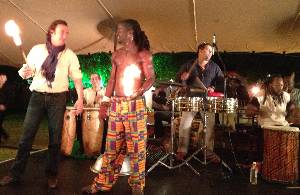 .. and then he wanted a skeptical Mr Pommery to join him fire-eating

Mr Rasta had not finished.  He fire-ate, and he passed the flaming torch up and down his body.  How did his pants not catch fire?  He dashed down into the audience and grabbed Cedric Michaux of Pommery, and he, brave man, was pulled back up on stage.  At least he held a flaming torch (I do not think he swallowed it).

He was probably wishing for a flute of perfectly chilled Champagne. The evening had started with Pommery and it went full circle, back to a Pommery Performer. And then we all got in our buses and returned to the luxury hotels that were our temporary homes.