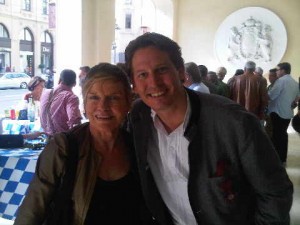 On the second day of Oktoberfest there is always a parade of local villagers, and this passes along Maximilianstrasse. Hotel Vier Jahreszeiten Kempinski, the forever-young grande dame of Munich’s luxury hotels, turns its front driveway into a party venue, to celebrate.

GM Axel Ludwig had 180 guests, mostly in lederhosen and dirndls, who were standing around tall tables decked in blue and white checks, the symbol of Bavaria.  They drank beer, ate from a Bavarian buffet and generally had a lovely time, as did the gal. 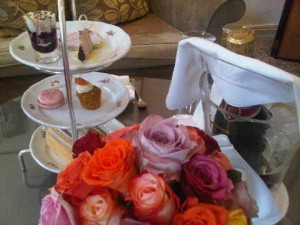 Nymphenburg porcelain at the hotel

The hotel goes back to 1858, but today it is a youthful beauty.  Room 488, which looks out over Marshallstasse, at right angles to Maximilianstrasse, is beautifully quiet, thanks to double-windows which open for the fresh air that Germans love.

It is great for those in a hurry: ten yards to real stairs, take 74 of them back down to the street, or 55 to the restaurant, with one of the ten best buffet breakfasts in the world.  Room 488 has a three-tier cake stand, with a welcome afternoon tea.  The plates in the stand are Nymphenburg. 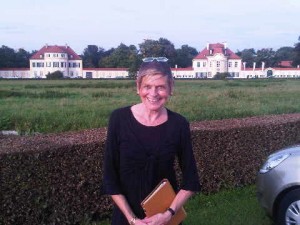 Porzellan Manufaktur Nymphenburg Service was set up in 1747 at Neudeck Hunting Castle near Munich.  Today the production is in four stately houses set in a crescent on the outer perimeter of beautiful Nymphenburg Castle.

During the week you can apparently visit the production but, bother, it is a weekend.   Thousands milled around the Castle’s immaculate grounds, looking at the palace itself and the statues set exactly along the gravelled pathways.

The current Duke of Bavaria, painted by Dieter Stein, 2005

The current Duke of Bavaria, Franz Bonaventura Adalbert Maria Herzog von Bayern, lives in one of the building attached to the main castle.  He is, interestingly, the main claimant to be the Jacobite legitimate heir of the House of Stuart.  He would thus be king of not only England but also France, Ireland and Scotland.

That could provoke discussion.  His Foundation, the Wittelsbach Equalization Fund, bought Nymphenburg porcelain from the State of Bavaria (Duke Franz, sadly, has no heirs but his brother Max has daughters). 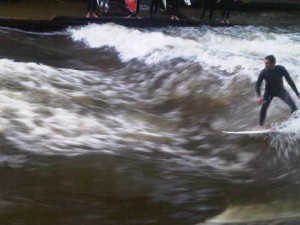 Surfing, right in the centre of Munich...

On our drive around town, we passed lots of revellers at Oktoberfest, and we also went to Surfwelle, the unique inner-city power surfing on the Eisbach river, in the English Garden, as the waters rush out below Prinzregentstrasse (watch it on YouTube).  Day long there could be dozens, if not hundreds of spectators.

This is one of the ten best free sports-watching venues in Europe (think how much you would pay to go to the nearby Allianz Stadium to watch Bayern Munchen play!). 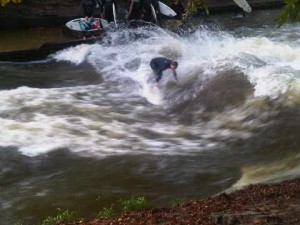 ..as soon as one Munchner falls in, another starts, from the opposite bank

Basically, this is what Surfwelle is.  The water is about 60 feet across and an artificial weir creates tremendous torrents.  Local guys in wet suits – 365 days a year, from dawn to 2200 at night – stand half on one bank, half on the other.

Each has a surfboard.  It is self-organising.  Guy on left bank throws himself in, surfs in a zigzag to the other bank and back again and so on.  When, inevitably sooner than intended, he falls in, guy from opposite back throws himself and board into the water.  And so on.

I am told that if a non-Münchner, a FOREIGNER, tries to get in on the act, someone immediately tops the swell and he makes a fool of himself, in flat water. 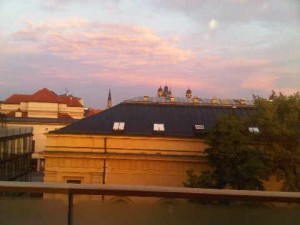 I prefer my exercise in a calmer environment, namely the rooftop gym in the six-floor Hotel Vier Jahreszeiten Kempinski,  Up there in the Technogym area, when it opens at 0630, I look out at the surrounding skyline.  Oriental guests are already swimming in the well-heated, 65-foot pool.

Thankfully at this time of the morning there are no front-convex beer-loving men about to go in and out of the sauna. 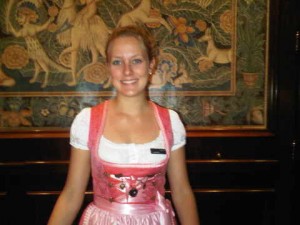 The hotel's dirndls are Trentini

And going into breakfast, with an added  Bavarian table to show off pretzels and würst and ham and  beer, I admire the Trentini dirndls all the women wear.  I love the juice, and the bio-yoghurt, and the little purple crocuses on the table.

I look out at Maximilianstrasse and think wow, this must be one of the best breakfast views in a luxury city hotel, anywhere.  I am brought copies of the Financial Times and the International Herald Tribune, and I cut healthy slices of seed-filled near-pumpernickel loaf.   This is, me thinks, luxury lifestyle of today. 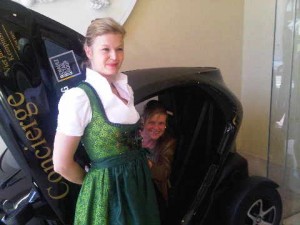 As I leave, Theresa comes out to show me the Concierge car.  Think SMART, tiny smart cars, and think half the size again.  A toytown car sits in the same front-driveway where the party was being held yesterday.  This is the car the concierge uses for nipping around Munich to pick up tickets.

Even with only a tiny Porsche Rimowa suitcase, there is no space for the gal, so she gets into a large black BMW and Peter, the driver in Bavarian vest and plus fours, drives to the airport.  The sun is shining.  Life in Munich is good.  Now where next?