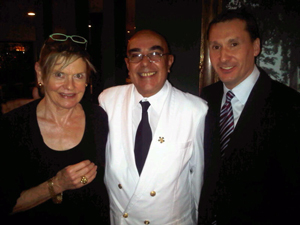 A lively breakfast waiter helps brighten a gal’s day. The Polo Lounge at the Beverly Hills Hotel is morning gathering place of captains of (Hollywood) industry and rappers in woolly hats that you are sure you should recognize but don’t.

Josef from Buenos Aires has seen it all…  he does not quite tango his way round the room but his feet nonetheless barely touch the ground and he has time and a big smile for everyone.

What is it, one wonders, about Argentinians and the Beverly Hills area?  It was, as we know, one Alphonso Bell who called a pocket of Beverly Hills Belair, or Bel-Air, after himself and his home town… 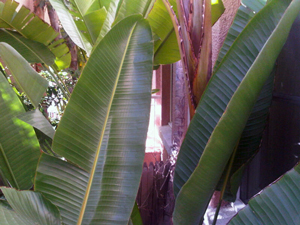 Palm fronds on the balcony of room 106, Beverly Hills Hotel

The Beverly Hills Hotel celebrates its centenary next year (2012) and it apparently is going to have a face lift, by that character Adam Tihany – think Bar Boulud and Dinner by Heston Blumenthal restaurants in yet another luxury hotel, Mandarin Oriental London Hyde Park.

Here he will have a challenge.  This hotel is steeped in history. Built 1912 by the President of Rodeo Land and Water, Burton Green. Owned variously by Margaret Anderson, who bought for $250,000. The Bank of America was owner at various times until, in 1954, it changed hands for a then-staggering $5.5 million, to Ben Siberstein, who left it to his daughters Muriel Slatkin and Seema Boesky, married to financier Ivan Boesky. 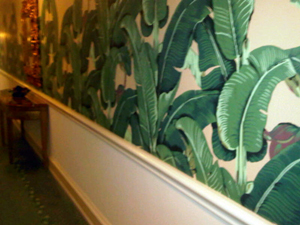 Well it is 12 acres, which is plenty of room for hundred-foot palms and a sprawling mass of pink buildings.  Some are bungalow villas (Walter Annenberg’s favourite was the four-bedroom bungalow five complex).  Other rooms are in conventional blocks, but all 203-total rooms are unconventional.

First floor rooms, say 106 or 125, have their own private terraces, terracotta upper level and lush-lush gardens a foot below.  Beverly Hills undergrowth, by the way, is powerful, copious and prominent, with enormous leaves.

Asked to define Beverly Hills Hotel, one might say the Condé Nast and other post-awards (Golden Globe and Oscars) parties, or David Beckham hanging out in Bar Nineteen 12.

One might, alternatively, say the building’s pink candy floss exterior, or the distinctive palm-frond paper that lines all interior corridors. 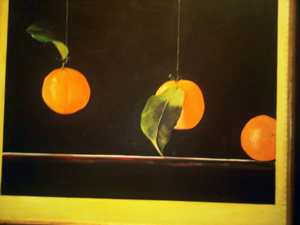 One of the paintings hanging in Park Hyatt Aviara

The corridors at Park Hyatt Aviara Resort, two hours’ drive south of Beverly Hills, are so wide and so high you could paper them with entire trees rather than mere fronds.

The scale of the interior here is such you feel like asking when the next shuttle bus is due, to take you from the main lobby left to the residential area (329 bedrooms on five floors) or right, to the conference area. Somewhere in this labyrinth is a charming painting of an orange tree, a reminder that the gardens outside are elegantly dotted with (real) trees weighed down with fruit.

There are also acres of meticulously tended lawns, one part of which is a specially good wedding venue as it is, cathedral-like, flanked by tall-tall palms (the skinny trunk with a what-not hat type of palm). 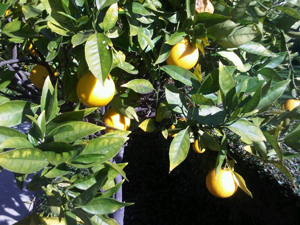 Sensibly this luxury resort has two pools, one for families and one adults-only.  Kids love coming here as it is only a few minutes’ drive to Legoland, which even parents admire as the privately-owned Danish toy brand is not only fun but educational.

Adults evidently love coming here too because of the golf, for business or pleasure. This Aviara-Carlsbad area is home to such golf companies as Callaway and Taylor Made.  Gary Player needs to come here from time to time, for meetings – is it true you might see him, in the Park Hyatt’s gym, doing a thousand sit-ups while balancing a 75-pound weight on his six-pack abdomen? 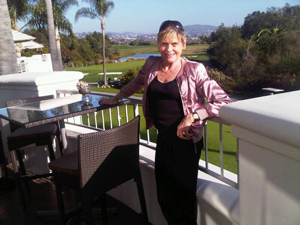 Others come merely to play the resort’s own course.  It flanks the lagoon, so you have stunning views, and Arnold Palmer and his guys spent nearly a decade getting it right.

The Argyle Steakhouse down at the golf clubhouse maximises the year-round idyllic climate of this locale.  Sit out on the terrace and you feel, too, as if you are already on a cruise ship.

Which is where the gal is now headed.  Tomorrow, Christmas Day, is her holiday. Back in 48 hours…