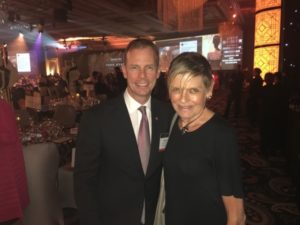 During that must-not-miss gathering of luxury hoteliers and others involved in top-end travel – at Virtuoso Travel Week in Las Vegas earlier this month – there were some 750 private parties in all. One of the most memorable was organised by Donald Bowman, who has recently arrived back in town as GM of Mandarin Oriental Las Vegas (he was here before, as number two, and he says it is just like coming home). Donald is a magnificent organiser, says the gal. Only a few weeks ago he was emcee when his culinary team did a guest-chef dinner at James Beard House in New York. On Tuesday August 9th, 2016, he outdid himself by organising a dinner for 110 Virtuoso travel advisors at the 20,000-seat T-Mobile Arena. 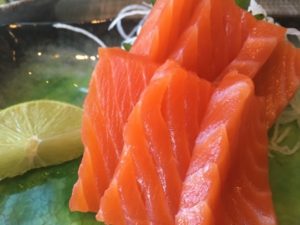 After years of delay, the $375-million arena opened April 6th, 2016, a joint venture between Anschutz Entertainment Group AEG and MGM Resorts International, co-owner of the hotel. The opening party, by the way, featured The Killers, Wayne Newton and Shamir. This Virtuoso event, however, was the first private party held there (Donald Bowman laughs when remembering how the invited guests were amazed when their transport sailed past his hotel, which they thought was their destination!). The table was beautifully set, and they were served salad, and their choice of Colorado lamb or salmon, cooked by chefs, working in harmony, from Mandarin Oriental Las Vegas, and from MGM’s events department. 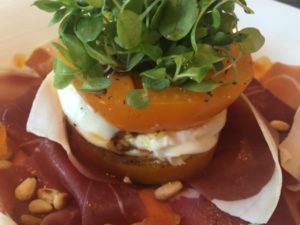 There will be so many events at T-Mobile Arena. Barbra Streisand was two weeks ago. Gwen Stefani is tomorrow, Friday August 19th, 2016, with Chris Martin and Coldplay scheduled for Thursday September 1st, 2016, and so on. There are games, basketball, boxing and more. A new Las Vegas NHL ice hockey team is being formed, by Chairman of Black Knight Financial Services Bill Foley, with 15% equity held by the Lebanon-heritage Maloof (formerly Malouf) family, who have regional distribution of Coors, Corona and Guinness to quench their professional thirst – they are also biggest shareholder in Wells Fargo Bank. Yes, there are big and significant names in Vegas these days. One name growing in importance, incidentally, is former GM of Mandarin Oriental Las Vegas Cliff Atkinson, who having spent a few weeks at Mandarin Oriental Miami was pulled quickly back by MGM Resorts International (he is now back in Vegas heading all MGM Resorts International’s properties globally, 48,000 bedrooms in all). 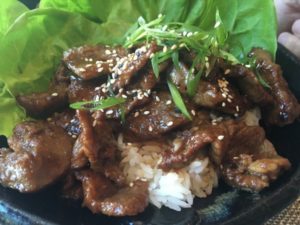 I was lucky enough to have a quiet lunch with Donald Bowman, à deux, in the calm environment of the luxury’s hotels international-Asia casual café, MOzen Bistro. I had sashimi followed by a burrata salad, he went for bulgogi, which just shows how international the cuisine is here. He talked with passion about his self-set task of learning all his employees’ names. When he left the hotel there were 300 team members, and when he returned four years later amazingly 200 were still here. The challenge is that because of so much business at the 392-room hotel, the employee count has risen to 600, which means he has to learn 400 names. A few a day, he said with a big grin.