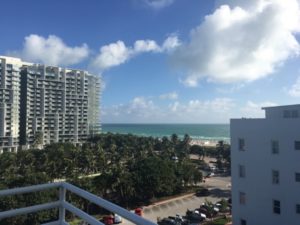 View from The Setai

The gal thought she was on a burrata hunt but it turned into a wild goose chase – and she never got to taste the truffled burrata, above, produced by farmers Johann Englert and Mike Scheps at Maplebrook in Vermont. But she did learn about the stuff, which probably only originated in the first decade of the 20th century on the Bianchini farm in Andria, Murgia: clever Italians took scraps of mozzarella curds, and whey, kneaded until the cheese is in strings, then moulded into balls. All this came up over a memorable lunch outside at The Setai, increasingly one of South Beach’s most significant luxury hotels.  Showing new-luxury, plus today’s weather, apart from servers, every other male but one appeared to be sporting designer swim-shorts, with sleeveless T-shirt or overshirt. 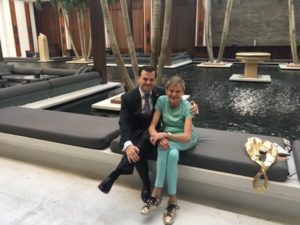 The exception, not surprisingly, was GM Alex Furrer, as always in a suit, though he did take his tie and jacket off.  In case you wonder, by the way, yes, I did have burrata, but no truffle, and I thought it came from Boca Raton. Then I thought it was made in Vermont; then the story was that Vermont milk, whether still in the cow or not, was trucked south to Fort Lauderdale to Fioretta. I found out that this is a trademark of Prime Line Distributors – that is to say a distributing rather than manufacturing company, so I gave up and we talked of other things. Come back on a Sunday and burrata would certainly be lost in a plethora of other fine things in life: the extensive Sunday brunch buffet includes bottomless Louis Roederer, and every desirable edible that chef Mathias Gervais can conjure up. 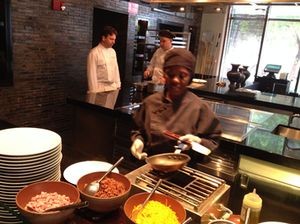 Come any day of the week during August and September, by the way, to the hotel’s main restaurant, Jaya – after the late architect Jaya Ibrahim – and there are special deals as part of Miami Spice Month, organised by Greater Miami C&V Bureau to attract diners to nearly a hundred restaurants throughout the city. Miami and the Beach are always up to something. The annual swim week has just finished and the Louis Vuitton collection was shown here, at The Setai: models in monogrammed outfits strutted their stuff in and around the hotel’s courtyard, with its inset decorative pools and, overhead, the German electronic blind that slides over to provide a roof in about three minutes flat.  This facility more than repays its original investment as now weddings, and such other events as fashion shows, can be hosted here. 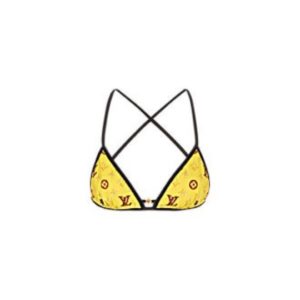 Not being in town for this particular Setai spectacular, I thought I should switch from researching burrata to looking at what the famous travelling-trunk maker produces when it comes to bathing suits. This is what I found, namely one tiny-weeny itsy-bitsy upper half of a bikini, selling on the Louis Vuitton site for $302. Yes, that is right, and if you want the bottom part you need to fork out the same amount again, making your investment, in terms of quantitative value, akin to buying land for a guinea pig hutch in London’s Mayfair. But that, of course, would not give you a sea-view. Wear your Louis Vuitton gear here at this luxury ocean-set hotel and you would fit right in with all the other female lovelies accompanying those men in their baggy shorts. NOW SEE A VIDEO OF THE SWIM SHOW BELOW