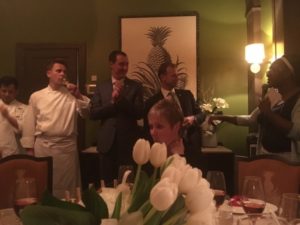 A few speeches, in the upper of the two-floor dining areas

Frankly, if the gal had not been there she would not have believed so many people could squeeze into the James Beard House, the legendary New York home of finest cuisine. More than 270 visiting chefs a year take over the kitchen, or rather a small panatry, one per evening, and produce a memorable meal. This was indeed the house where James Beard, 1903-1985, lived, worked and cooked and ate – it is now run as the James Beard Foundation. This particular evening was the turn of David Werly, Executive Chef of the luxury Mandarin Oriental Las Vegas, and he, and four chefs and five others, had travelled east from Nevada to produce the meal in the kitchens of Mandarin Oriental New York. 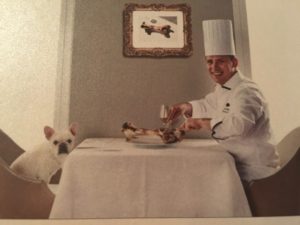 Think of the logistics, which included planning and transportation, and not forgetting anything (the printed menus even had a charming photo of David Werly and his dog). First, however, it was unlimited Perrier-Jouët in the miniscule back garden, and then we slithered, like sardines in a can, into our seats – I sat next to Susanne Hatje and Shelly Cruz, our backs to a wall of James Beard’s eclectic book collection, and if any of us had eaten one more of Bien Cuit’s delicious bread rolls we would have got stuck in our minimal space, unable to move. Goodness only knows how the servers – not from Mandarin Oriental Las Vegas – changed plates. They seemed to ‘throw’ the wine, which miraculously always ended up in the right glass. 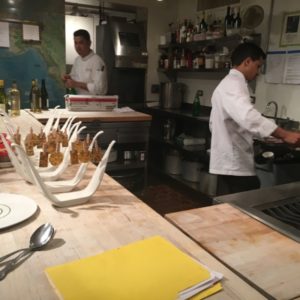 It was non-stop finishing in the kitchen…

And so the menu? There had been one-bite canapés outside. Now, at table, each place had a small stemless balloon glass with a steamed egg custard in a broth, and we were brought plates with triangles of foie gras terrine. Next came small presentations of butter-poached Maine lobster with sabayon, plus langoustine and scallops. The main course was a bit of Colorado lamb loin, with a tiny mound of white bean mousseline and a vine tomato. Three types of goat cheese were connected, on each plate, by artistic drizzles. The finale, we thought, was a boule-sized red ball with holes in it, namely a raspberry meringue holding mascarpone cream creations. But no, there was more. 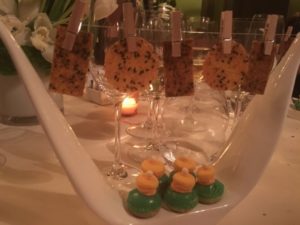 Going through the kitchen, I had seen the beginnings of sculptured creations which ended up as boat-shaped dishes of bon-bons, with, hanging overhead as if important billets-doux or washing on a line, wafer-thin crackers. This course was a suitable ending, and after short speeches, from Donald Bowman and the Beard House Manager and a few others, we somehow managed to extract ourselves from the space between table and wall of books – a space which, I must confess, appeared to have shrunk as the dinner progressed – and make our way home. My overall opinion, in retrospect, is that this was an extremely clever marketing exercise. First, it elevates the professional pride of the chefs, and Sommelier Will Costello, who, to go with the main meal had chosen a French and Italian list, culminating in Renardot Foche Bougey Cerdon Savoy NV, with the raspberry meringue. Next, the evening offered a mega challenge in logistics, which, to the visitor’s eye, seemed to work flawlessly. And from the hotel’s overall perspective it showed that a heavy marketing spend can help to cement a luxury property’s dedication to fine food and wine. I certainly met a fascinating group of people, including a pair of veteran connoisseurs of the world (she in a reversible marigold and black silk jacket made for her in six hours in Ho Chi Minh City), and a Hungarian banker, and a Ukrainian banker who is a fanatical wine collector. Everyone there will talk about the evening, and we all know the power of word of mouth. Well done Mandarin Oriental Las Vegas. Now see THE VIDEO BELOW, of another chef Shotaro Kamino from Iyassare in Berkeley CA, similarly attempting to ‘cook’ in the hyper-cramped Beard House kitchen…