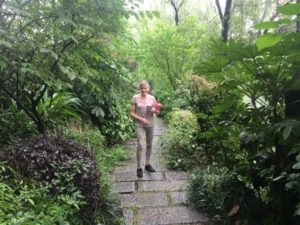 Marco Polo said that Hangzhou, capital of Zhejiang Province, was the finest and most splendid city in the world. Today it is just under an hour by high-speed train from Shanghai, though once at Hangzhou station it can take as long again to get to West Lake (Xi Hu), the 1,500-acre freshwater lake that is the main draw for many of the tourists. Take a boat trip in and out of the myriad arms of the lake, or cycle round some of its 12-mile main perimeter. The gal, visiting the signature lake-set luxury hotel, Four Seasons Hotel Hangzhou at West Lake, sadly did not have time even for cycling, but as she walked she was constantly on the look out for Alibaba chief Jack Ma. 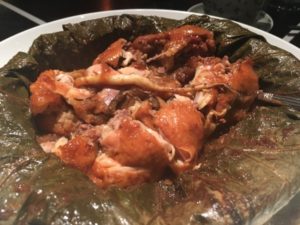 Jack Ma is from here, and it is said that because of his importance, President Xi switched the coming meeting of the G20, the first in China, from the standing doughnut-shaped Sunrise Kempinski Hotel Beijing at Yanqi Lake, which had been specially built for it, to here. The meeting is not until September 4-5, 2016, but already serious – capitalize that – preparations have begun. Roads are being reconstructed and last week public gardens were planted with the exact flowers that should be in bloom for G20, to check that they pass muster, and take photographs ahead of time. 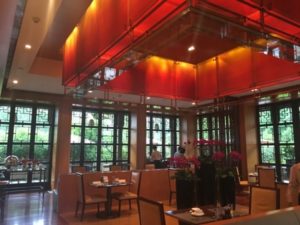 Last time, five years ago, I had chosen Beggar’s Chicken from Jin Sha’s menu, and they had one ready for me tonight (see the video below for its presentation). This is comfort food, Chinese style, and afterwards I was ready for bed.  The rooms here, although only opened 2010, are early 20th century style, with a bit of the Torrey Pines, just north of San Diego, about them. Corner suite 205 looks out over part of the lake, with its inset hotel swimming pool. Windows open, I could hear guests chatting happily as they walked the beautiful grounds, laid out by Bill Bensley – GM Alastair McAlpine now has several outdoor wedding venues. There are many regular staycation guests. One lady, grown up but obviously eternally young, is often inspired to write a commemorative poem. Tonight she has written a piano piece, dedicated to the hotel, and she premièred it on the hotel’s grand piano (memo to all hotels who would like bespoke sonatas, make sure you have a Steinway handy, and well tuned). 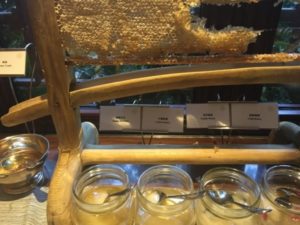 .. and its honey selection

Many staycationers wait for a later breakfast, dim sum back in Jin Sha, which was designed by SPIN and looks equally impressive by day as by night, but this early riser cannot wait. I also love WL (West Lake) Bistro, looking out over the water. It is a little too wet to sit out on the terrace but, anyway, I am fascinated by families helping themselves from the buffet. Tiny princelings, single children with parents and, generally, doting grandparents, eschew the low-set kids’ table to try to get something they can barely see, let alone reach, from the adults’ spread. After that, I admired the original calligraphy being created in the luxury hotel’s lobby. No-one was playing the piano at that hour. Now see the Beggar’s Chicken video below…