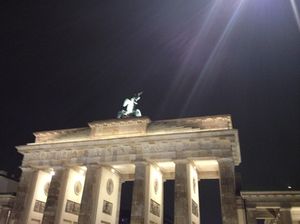 Brandenburg Gate, as the gal left her Adlon home

Berlin’s Brandenburg Gate, originally a city gate but now purely triumphal, is THE symbol of Berlin, but sadly few of the nearly-two-thousand grey suits who were at the 2014 annual International Hotel Investment Forum (IHIF) saw it.  They were closeted away at InterContinental Berlin, which managed the conference superbly.  The gal, however, always stays at Hotel Adlon Kempinski, and she passed through the Gate, on foot, on many occasions. On the first gruelling day of the business-stay in Berlin, it was, for the gal, a case of getting out before the sun came up, en route to a seven o’clock breakfast meeting at the Mövenpick (amazing yoghurt table, amazing everything, and a pink-dayglo bar leads right off the restaurant). 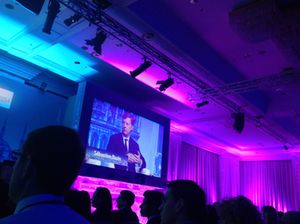 And then it was the conference.  At all these events, many come to network away from the main proceedings but, as always, it was the global CEOs’ panel that attracted the most actually to sit still, and listen. Sébastien Bazin, recently installed as Chairman and CEO of Accor, was the big draw.  With a draconian reputation, he was actually pretty brave to face the audience, although there was no time allotted for questions from the floor. I was longing to ask what exactly he is doing about Sofitel, with its sub-brands, and is it ONLY his M Gallery brand that is interested in women?  Anyway, Mr B had very natty silver-buckled shoes: like the other panellists, he wore a dark grey suit, and a sober tie, and black socks – Interstate’s Jim Abrahamson was distinguished by a blue shirt. 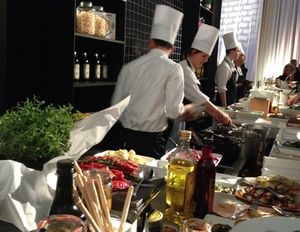 It was generally agreed that the industry has been left behind by social media and interestingly there was no overt sign of any social media going on during the conference. Sébastien Bazin stated that the leisure industry has a lot to learn when it comes to the innovations seen in the mobile phone technology market – he also questioned the need to form strategic alliances. This sounds like a man who does not network.  He certainly was not at the outstanding party that InterContinental Berlin threw one night.  The ballroom was transformed into a giant open kitchen, with 12-foot display boards announcing charcuterie or pasta or desserts, and serving stations around. 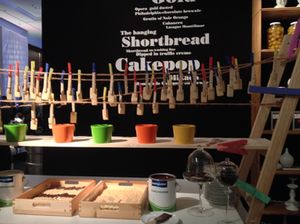 It was brilliant – a luxury hotel doing a pop-up restaurant, just for a couple of hours because then it had to be taken down, to get ready for tomorrow’s seated sessions.  More questions and answers, and awards, like the Lifetime Achievement award to Ian Schrager who, as if a Hollywood star, opened by saying how sorry he was his father and mother were not there.  He is such a tiny man.  His partner in the lifestyle brand, Edition, Bill Marriott, must tower over him…