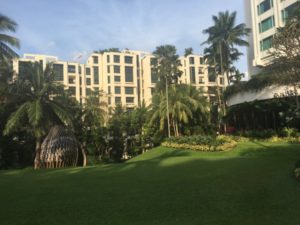 The orchid house, left, is in the garden

One thing the gal had yet to learn was how to fly a drone, but now she did, at the luxury Shangri-La Singapore. This mammoth hotel, the one that started the Kuok family’s entire Shangri-La empire, seems to have everything (well, not quite everything – the hotel’s 458-room Tower block is out of action, for nine months from last August, for a complete Bond design re-do, which includes a new high-up, own-run Japanese restaurant, with a grill going in the venue formerly occupied by the leased-out Nadaman). Never mind, there was plenty else to see. Shangri-La Singapore finally opened its unique orchid house, thought about by the Kuok family for so long and designed, as an open-slat teepee, by Franklin Po of Tierra Design. 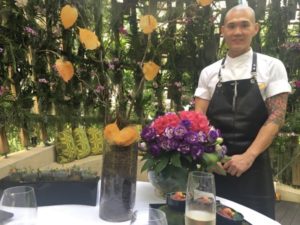 It is, well, not only unique but stunning. See how – photo at top of the story –  the structure’s open top allows you to look out at the sky, or a drone to look in. Take one of the dinner-in-the-Orchid-House packages, indeed, and a drone video is part of the amazing experience. Since its opening just a few months ago, the Orchid House, with its 300 orchid plants suspended from vertically-set wood-veneer planks from Germany, has become THE place for proposal and anniversary dinners. I had met the Orchid House chef, a tatooed artist called Vincent Wong, a couple of years ago when he was the Meat Master at Jing’An Shangri-La in Shanghai. Now he is the maestro here, producing holistic dishes that tie in with his love of mother nature. To go with our Veuve Clicquot, he produced tiny dishes of vegetables with micro cress and edible soil; little dishes of calx, salsify and tomatoes. 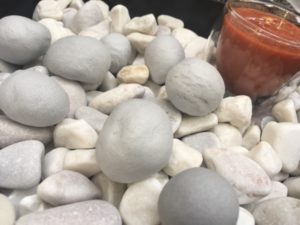 Another of his canapés is what he calls Pebbles, a dish of real pebbles topped by what look like other pebbles but they are in fact baby potatoes, with hol sin mayonnaise; and, hanging from a small, leaf-less tree on the table, his Leaf, Leaf, celeriac chips dusted with kimchi salt. Ten out of ten for imagination, Vincent Wong, and similar marks to your boss, hotel GM Reto Klauser, who being a former chef himself understands the publicity and marketing appeal of doing things differently. Buy a dinner in Orchid House, by the way, and you are offered a drone video of the event. Oh what fun! As I said this was my first experience and initially using the luxury hotel’s own machine I had it soaring up and down at Usain Bolt speed, but I soon learned moderation. This was an evening I will never forget. Now see a somewhat topsy-turvy video below!