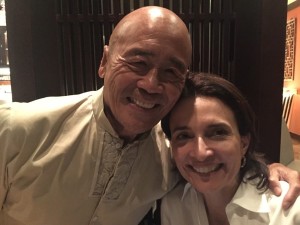 Cariocas – people born in Rio de Janeiro – are so fit and healthy. All ages, all shapes, are cycling and running and walking the dedicated boomerang-shaped pathway that skirts Copacabana Beach and Ipanema Beach. There are paracourse set-ups, and they are used (it is fascinating for the gal to learn that typically women retire at 50, and men at 55, so they have masses of time on their hands). Look out of your windows, say from the ultra-luxury Belmond Copacabana Palace, and watch all-day beach volleyball games on the pristine sand. People keep fit here, and part of that is eating well, of course. That leading culinary globalist Ken Hom has been a hotel regular for years, spending a long time each day swimming in the hotel’s lovely pool. Chatting with hotel GM Andrea Natal back in 2013, he and she hatched an idea. 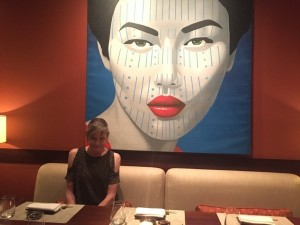 One of the MEE booths

A hotel store room to one side of the pool had been turned into a nightclub, but now something else was needed. Why not a Ken Hom restaurant? This led to the opening, in 2014, of MEE, a Pan-Asian restaurant that has hints of a Nobu but has Ken Hom‘s unique light touch. The heavy bar counter has been left from before, but designer Michel Jouannet has added a glass screen, behind, that can look through to the working kitchen, or, at the flick of a switch, obscures it by a white wall. The 92 seats include sofa-type lounging in two semi-private booths dominated by giant Myanmar faces, by a Belgian artist. We quickly chose our table, to give a good view of the kitchen, and soon the entire dinner-only restaurant was, as always, filled, primarily with high-achieving local millennials, attracted by reputation, and the Michelin star that MEE got within a year. 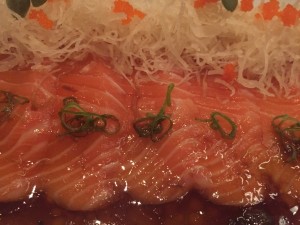 The chic lady sommelier, in highest heels and a kind of short tent-dress, brought a magnum of saké with a specific floral tone, and poured some into tall-stemmed ogee-sided glasses. Instead of the eight-course Michelin tasting menu, I went à la carte seafood. The crispy salmon carpaccio with capelin fish roe was supposed to be rolled, around the crispy radish, and yes it showed the light-as-air Ken Hom touch). There was plain salmon belly sashimi, shake-belly, and grilled Patagonian toothfish, merluza sakana, a cousin of the world-famous black miso cod. At that point the conversation, prompted by the arrival of Ken Hom himself – making one of his thrice-yearly visits to Rio – turned to truffles. Why? Well, Ken Hom divides his time not only between here and enjoying his home in Thailand, but also spending spells at another home, in a village near Cahors. 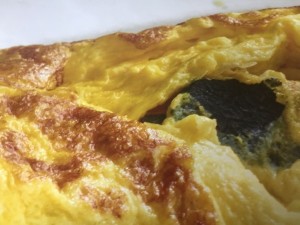 Truffle omelette at the Pebèyre home

And that, of course, is the centre of France’s black truffle trade. Ken Hom and I have a mutual friend in Pierre-Jean Pebèyre – his family is to black truffles what Rougié is to foie gras, Bordier is to butter, Petrossian to caviar and so on. Truffles, a marvellous book with photographs by Jean-Pierre Gabriel, is a eulogy to black truffles by Ken Hom and Pierre-Jean Pebèyre. What are they, how are they hunted and so on. I remember so well a truffle omelette at the Pebèyre home a few years ago and now I know what I personally did wrong cooking eggs with a truffle only last week (I should have let the mix stand for at least an hour before cooking). Come to think of it the breakfast omelettes here at Brazil’s leading luxury hotel are pretty good too, even though I have not seen truffles listed as one of the available additives