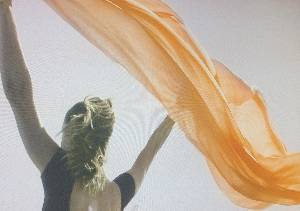 The L. Raphael look makes you feel super-human, out of another world

L. Raphael is possibly the most successful spa product in the world – and it is here, in Cannes, at the star luxury hotel that is Le Martinez, part of Leading Hotels of the World  (why is it here?

Richard Schilling, who runs the hotel, was introduced to L. Raphael by one of its fans, Caroline Scheufele,  Co-President and Artistic Director of Chopard, and that was that).

She is quite something, Ms Schuefele – a sponsor of the Cannes Film Festival, Chopard is also lead sponsor of the forthcoming movie Diana, in which lead star Naomi Watts only wears Chopard, and now she is working on Chinese star Fan Bingbing‘s next comedy.

No wonder she, Caroline Schuefele, needs de-stressing regularly. And, agrees the gal,  50 minutes of a spatial-look Oxy-Tech II machine being directed gently to all parts of your face is total bliss.

Purely enticed by word of mouth, women, and some men, come from far and wide to drop oodles of cash, and so well spent, on L. Raphael time, here in Cannes, or at Gstaad Palace or Four Seasons George V in Paris, or at stores in Geneva and, imminently, New York. 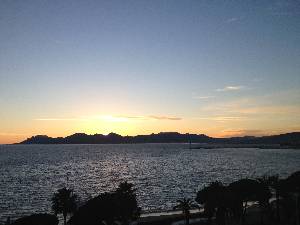 Memorable view from suite 531 of the Martinez

The knowledgeable also stay over at the Martinez, which is obviously packed out during ILTM, and the Cannes Film Festival and at other major events.  Immediately after ILTM it was host hotel for an annual world policy conference.

What a lovely venue to try to decide what to do, globally… Of all the 397 rooms, corner suite 531 is my favourite, and one of my top ten suites, anywhere.  Look out of the French windows in the six-seat dining room or the adjacent circular-walled salon, look down at the ground-level heated pool and, across the Croisette, to the private beach area and south across the Mediterranean.

I love the Champagne colours, the iconic big-cat sketches, the Hollywood bathroom, the feel that you ARE Jean Harlow or M. Monroe. 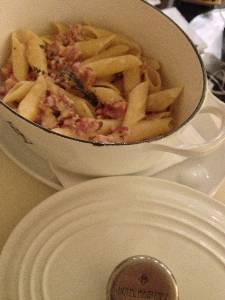 I love having a proper public staircase, a movie-set ideal, oval, 132 carpeted stone stairs down, fifth floor to the ground or back up – great exercise, to complement the 24-hour Technogym.

I love the breakfast, with a guy squeezing oranges to order, and such lady-like servers.  One night, having to write to meet yet another deadline, I ordered up a simple penne carbonara.

Oh boy, this is the world’s very best.  It came in a cast-iron, Le Creuset-type dish. The home-made pasta was twice the width of commercial penne.  The carbonara was heavily-smoked best-quality ham, with the lightest possible cream sauce.

Try this with a plain green salad, and a glass of Taittinger Rosé, and the Harlow-Monroe effect soars yet further. 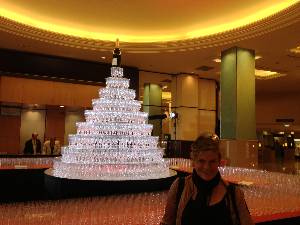 The lobby holds a cascade of glasses, enough for 3,000 guests...

The Martinez is also full of surprises.  Who would expect a display of fuchsia-heeled shoes in the lobby? Or to find bright blue city bicycles outside (no-one in Cannes seems to cycle, their coiffures are too precious).

Who would expect, one day, to find the lobby transformed into an art work of 3,000 plastic flute glasses, in cascade formation and ready for 700 bottles of – white – Taittinger to be poured.

That was the day, turning into the night and on to 0400 the following morning, of ILTM’s annual official party.  But the hotel, which does great events for the film festival and boring (but high-level drinking) events for those at a real estate conference, can cope. 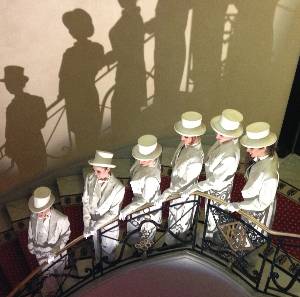 .. usherettes wait on the main staircase ...

Usherettes got into the act, lining the stairwell.  Food stations included barbecues outside, around the swimming pool (did anyone fall in?), and dessert tables.  I homed in on cold cuts and cheeses and the make your own salad stations as there were no lines, there.

The to mammoth buffets? Find out what others are eating, and go elsewhere.  If you follow the crowd and join the end of a long line you miss invaluable networking time, and catching up with long acquainted and meeting new people is – partly – what such a vital event as ILTM is about. Luxury travel demands ultimate professionalism. 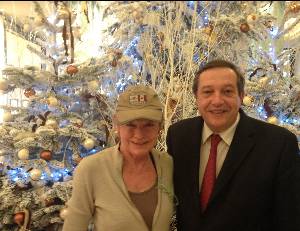 .. Richard Schilling, the ultimate professional, is still around the following morning, when the trees are already up

Consumers are at the centre of it all, a world that revolves, in a bespoke way, around what they want, or did not know they wanted.  But all those supplying that world have to be consummate professionals.  Richard Schilling, boss of the Martinez, had been up until 0400 supervising the ILTM party at his hotel.

I came down at 0615, to do my usual pre-dawn run along the Croisette, and found the lobby was now occupied by – a huge ‘tree’ formed of at least six trees grouped together to form one ceiling-high giant.

When Richard Schilling himself appeared, a few hours later, of course we had to have a commemorative photo of this luxury hotel.