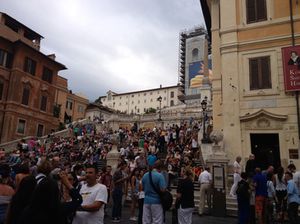 Even now, in September, Rome is a seething mass of tourists. Look at the Spanish Steps. Admittedly the 17th century Fountain of the Old Boat (Fontana della Barcaccia) at the base is under wraps – it is being repaired, paid for by Bulgari. But day long the 132 steps up, or down, are littered with people (what bliss it is to get away, to the seclusion of a luxury hotel). One day in Rome, the gal needed some exercise. She did ten, TEN, ups and downs of the Steps. How about that for bragging? 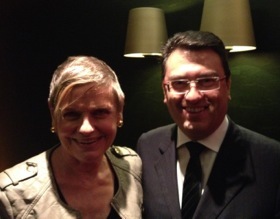 Get away, as Michael Douglas and Catherine Zeta-Jones did the other day, by staying (for five whole days) only 12 minutes away at the Cavalieri – Waldorf Astoria. As I have said before, this is a unique hotel, a resort in a city. From its 15 acres of hilltop, look down at The Vatican. The hotel’s GM, Alessandro Cabella, has only recently arrived (from Venice). What are the differences? There, at Hilton Molino Stucky, he looked out at water – canal, or rooftop pool – and here he looks out, from the Giardino dell’Ulliveto restaurant, at one of his two pools. Here he has three Tiepolos, and over a thousand other art works… 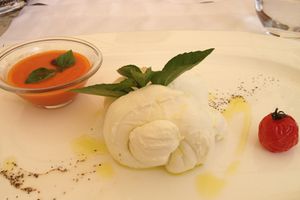 A tasting of mozzarellas

Heinz Beck’s three-star Michelin restaurant atop the hotel is closed today so we lunch poolside. unch is lovely. Wafer-thin focaccia sheets arrive, and a well-being salad, with corn, cabbage, lettuce hearts, fennel, taggia olives, orange and fresh cheese. Thinking of the stamina needed, later, for the Spanish Steps (times TEN) I go on to another starter, named ‘100% buffalo mozzarella L’Ulivetto’. I have a plain ball, a smoked ball, and a twist of knotted treccia, plus a bowl of fresh tomato dipping sauce. A side of spinach makes this extra healthy. I mention Obikà, the chain of mozzarella bars devised by Bulgari Creative Director Silvio Orsini – worldwide, they are now in Dubai, London, Los Angeles, New York and Tokyo.  Here in Italy, they are in Florence, Milan, Palermo and Rome – but not yet in Silvio Orsini’s birthplace, Naples.  The Roman dish of deep-friend mozzarella, translated as ‘in a coach’, is honestly one of the world’s best tastes, ever. 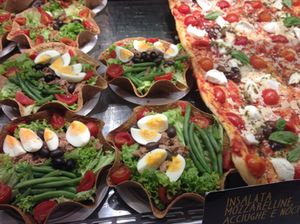 Salads and pizzas at a to-go stand

When it comes to food, more and more luxury is simplicity, to allow products really to shine. Gino D’Acampo, the Naples-born celebrity chef who is absolutely the most appealing, as well as good-looking, culinarian on television these days, is currently promoting Italian. Watching him, in Florence, cooking a steak on the bone – three fingers thick, exactly three fingers, no more, no less – made me think that if luxury hotels had such shows permanently beamed on to restaurant walls they would at least double their business. But back to mozzarella. GOSH that Ulivetto platter was great, and, here in Rome, even pizza slices at street vendor places look irresistible.