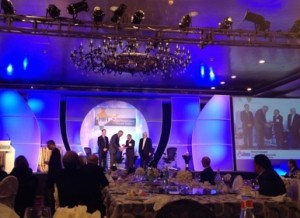 It is that time of year when, as always in January, any luxury hotelier with any interest, or need to be interested, in India is in Delhi for the Hotel Investment Forum India, generally known as HIFI (Indians are Olympiad champions at the acronym). This year, HIFI honoured as lifetime achiever J.W. (Bill) Marriott. He thanked HIFI by video, and his award was accepted, in actuality, by the head of Marriott for Asia, Simon Cooper. He received it from the first-ever lifetime achievement winner, P.R.S. (Biki) Oberoi. 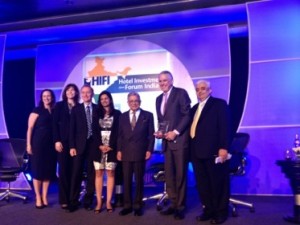 Another group on the HIFI stage

HIFI this year was the most optimistic ever. What with India’s new e-visa scheme – not yet applicable to the UK or US sadly – the Ministry of Tourism Secretary, Lalit Panwar, claimed he would more than double the current annual incoming tourism, from just under seven million at present, in three years. There were lots of hotel speakers, including the CEO of Taj, Rakesh Sarna, and the new President Asia of Four Seasons, Mike Crawford. I was interested to hear the CEO of Make My Trip, Deep Kalra, say confidently that he expects total online reservations to surpass 50 percent but never reach 100 percent. 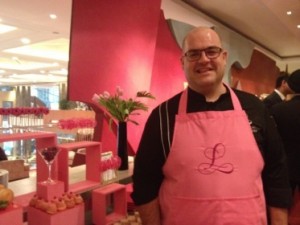 As always, HIFI was brilliantly organised by the Burba Hotel Network BHN (yes, use the acronym) and Horwath HTL, and, as always, it would not have been so enjoyable for all the over-300 delegates had the host hotel, Leela Ambience Gurgaon, not been so hospitable. The GM, Michel Koopman, is a foodie creator, and he sees HIFI as an opportunity to let his team come up with ideas. Over the two days of HIFI there were four breakout sessions and each was colour-themed. Day one was green, and then pink. 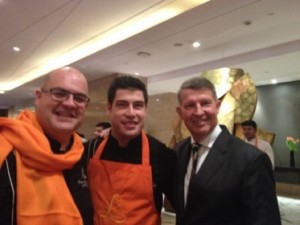 .. and orange (GM Michel Koopman is on the right)

Day two was orange, and then black-and-white. In each case, the chefs of the luxury hotel, led by Ramon Alvarez Salto, wore appropriate aprons, and the lean-against tables and buffet tables had that colour cloths, and the food was as coloured as possible (the macaroon makers had had a heyday). It was SUCH fun – which is more than you can honestly say for some investment conferences, particularly New York’s.