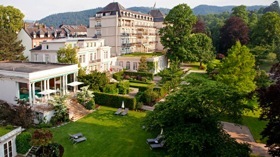 The hotel, from Lichtentaler Park

Some luxury hotels seem, like Xanadu, to be mystic dreams – do they exist or are they merely figments of our imagination? The gal always wondered why there was so much praise for Brenners Park-Hotel & Spa, Baden-Baden, but now she has been there she is heading the cheerleaders. As a real VIP said only the other week, this is like another world, the world you want to imagine – but it is real. Baden-Baden lovers include Germany’s highest percentage of millionaires, per capita, who choose to live in this Black Forest area, with a mere 55,000 population, and President Clinton, who enjoys hassle-free café-crawling when he comes to visit a friend.

You can fly into Baden-Baden’s own airport, which is great if you have your own plane or if you grit your teeth and cram into a Ryanair airborne people-carrier – the airport is a former Canadian Air Force base. I could have taken the TGV from Paris (under three hours total) but I flew into Stuttgart, about 90 minutes’ drive away. The WiFi-enabled Mercedes drove past the lush greenery and rolling hills that typify Baden-Baden’s suburbs, and turned into quiet Schillerstrasse, the front of the five-floor hotel, named for court tailor Anton Brenner who bought what was Stéphanie les Bains here, in 1872. 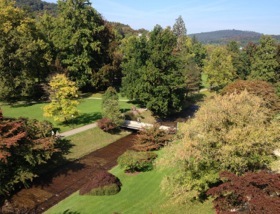 Looking down from room 414 (the brown is the stone-bottomed, clear Oos river)

Today, as part of the Oetker Collection, the hotel has exactly 100 rooms, nearly all with usable balconies. Those facing the rear (like mine, 414) look down at the clear waters of the stone-bottomed shallow river Oos, which eventually flows into the Rhine.  Land this side of it is hotel. The opposite bank is the public Lichtentaler Park, but somehow it all flows together, no ‘us and them’. Baden-Baden has a year-round mild climate with refreshingly clear alpine air, and, early October, we sat outside for lunch, on the Wintergarten terrace. Was this where England’s King Edward VII, Queen Victoria’s less-than-fit son Bertie, sat when he came regularly to Brenners to take the cure? 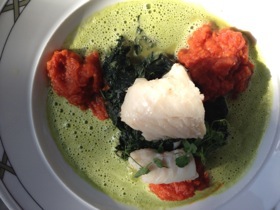 And did he, I wonder, also order a Brenner Classic? This dish has a strong border around it on the menu stressing its importance. What arrives is cod poached in a herb stock, served with tomato fondue and leaf spinach – and, for others but not me, boiled potatoes – on a basil sauce. The result is classically gorgeous, eat every tiny morsel. Look around, at mothers walking babies and playing with toddlers in the park opposite, and right here, regular guests, some who stay up to eight weeks, choosing their favourite dishes or asking the chef to concoct something. 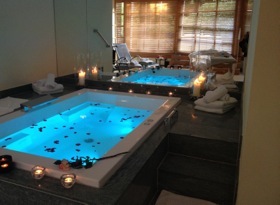 Part of a spa room

The name Stéphanie is being revived. An adjacent five-floor bulding, Villa Stéphanie, opens around the end of the year, adding 15 gorgeous new bedrooms (including three suites with spas that are equipped to your taste) and two floors of spa, incorporating such attractions as Germany’s best make-up artist Horst Kirchberger – there is also an attached medispa, with Germany’s best, again, be it dentistry, gynaecology, nutrition, opthalmics or preventive medicine. I had a back massage from a Tunisian in the current spa and wow, not sure what he did with the kneading and knotting but I know I felt even healthier afterwards…