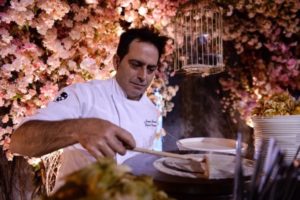 Want a taste? (both photos Getty Images for Four Seasons)

On Saturday September 9th, 2017, Four Seasons converted 224 King Street, Toronto, into what most what call a pop-up heaven (but for some reason the New York-based HL Group’s Matt Levison says firmly this was Four Seasons Pop Down). Four hundred VIPS, socialites and those taking part in the annual Toronto International Film Festival TIFF were treated to the kind of experience that Four Seasons does so brilliantly at ILTM in Cannes every year, where cleverly the company transforms a Gray d’Albion apartment into a culinary and networking retreat that no lucky invitee would miss.

As in Cannes, charismatic Vito Mollica, of the group’s Florence and Milan hotels, was, here in Toronto, cooking his signature risotto, and more.  The Toronto evening also had Four Seasons’ culinary talents of Sylvain Assié, Toronto; Chris Ford, Los Angeles (Beverly Wilshire), and Joaquin Grimaldi, Buenos Aires. Mixologists came from London (Ten Trinity Square), Mexico City, and Seoul. And, of course, no such event would be complete without Paris-based floral genius Jeff Leatham. There were no sponsors: the evening was entirely thanks to the benevolent hosts, Four Seasons Hotels and Resorts.