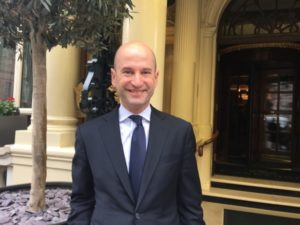 Max Binda welcomes, outside The Connaught

What, you might well ask, does the photo above, of Loews Regency New York, have to do with one of London’s iconic luxury hotels, The Connaught? Well, this was the site of Loews’ third annual London Power Breakfast, last Friday, May 13th, 2016 www.loewshotels.com. It was personally hosted by Loews’ Chairman Jonathan Tisch, who had flown in with his fashionista wife Lizzie Tisch, and a small retinue of Loews disciples, and not surprisingly Max Binda, GM of The Connaught, was on hand, even at eight a.m., to greet everyone (in fact, good for Mr B, he was there waiting for the gal as she turned up ten minutes ahead so that she could say hello to him, before heading for the breakfast, marvellously organised by Mason Rose. 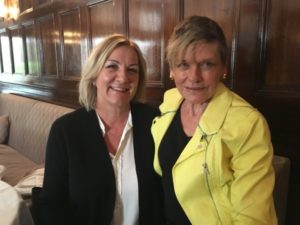 I just wish I had a copy of that 90-strong guest list. Tanya Rose and her team are unique in being able to summon up the most amazing number of people who not only turned up, but on time. I really enjoyed talking, as always, to Rafael Serrano, the entrepreneurial banker-turned developer who is turning London’s historic Admiralty Arch into a hotel, and, also, with Kim Winser OBE, who is on the board of Peninsula (her own fashion line, Winser London, www.winserlondon.com, really does have the type of clothes that top businesswomen want to wear). Anyway, how on earth does a hotel cope with a hundred people crammed into a small restaurant which has some square and some round tables, which makes seating difficult, but no-one minded. 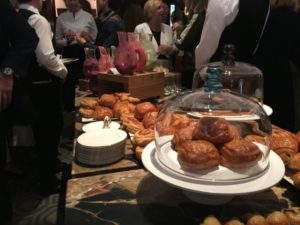 Nibble on croissants before it was time to sit down

There was a central buffet for anyone who wanted to nibble on a croissant before the sit-down part started, and they looked jolly good, too. Then we sat, and everyone had a choice of one dish, from yoghurt with fruit through to full English, or a kind of crown of smoked salmon filled with scrambled egg. There were toasts on each table, and one-bite muffins were passed round, and excellent coffee was liberally poured from silver pots. And then Jon Tisch stood up and made a fabulous welcome talk, funny and informative – see the video below. I loved the way he recounted how his grandfather had two hotels initially and moved the furniture from one to the other, depending on the season: the name Loews came later after the family bought Loews movie theatres so they could put a hotel on top. 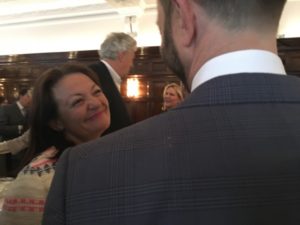 There were lots of stories, including one of his mother refusing to move out of her suite in Loews Regency New York when the hotel was about to be closed for redecoration (‘let them work around me’). There was fodder galore for the really select group of media invited. The short list included Lisa Grainger, who edits the UK’s best luxury travel publication, UltraTravel, and one of her columnists, Celia Waldron, and Tess Macleod Smith, who runs Net-A-Porter’s magazine Porter wwwe.net-a-porter.com – there was also Nicholas Coleridge, who runs all Conde Nast publications worldwide, but he is way above the mere ‘media’ label.   As I said earlier, to get such key people to turn up for breakfast at that hour, even at one of London’s signature luxury hotels, is extraordinary. Well done Tanya Rose, and thank you, Jon Tisch. NOW SEE THE VIDEO, BELOW