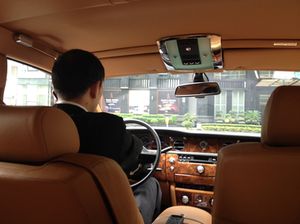 Arrival in a leather-lined Rolls-Royce

It is always elegant to be picked up by a memorable car, and Shanghai’s hotels provide lots of variety. Hotel Indigo Shanghai on The Bund offers a bright blue Mercedes, WiFi-enabled. Banyan Tree on The Bund has an old-gold London taxi. But what many consider the ultimate of luxury hotels on The Bund, The Peninsula Shanghai, has a fleet of Rolls-Royces – in Peninsula green, of course. As well as modern Rollers, says the gal, the hotel also owns a 1934 model, recently restored, with the WiFi and pale sandalwood leather interiors of its younger siblings. 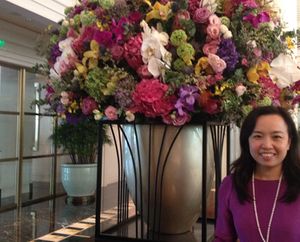 Inside the hotel’s elegant eau-de-nil and crystal lobby, gigantic flower arrangements make a statement that even Versace, in its bright-as-summer designs, could emulate. Cecilia Lui, arguably the most connected lady in hotel PR when it comes to global media of key interest to the whole of Greater China, actually matches today’s flowers (or is it vice versa?). It used to be hotels in Paris that had best flowers in the whole wide world. Now, honestly, Shanghai is up there as race leader. 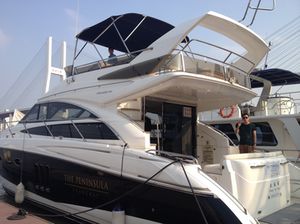 And The Peninsula is leading in another respect, as the only hotel in China to have its own private yacht, a 60-ft English beauty, moored at Shanghai Yacht Club, five minute’s drive south of Hotel Indigo. Peter Greenberg had been recording ten-minute slots for his CBS radio show here the last few days (in my session, we discussed hotels’ rating systems, and how many pillows beds should have; he wants as many as possible to create a personal fortress). Now the pop-up, but professional, recording studio has moved on, and the yacht is back to its pristine and polished state. Cecilia scuttles downstairs, past the galley. 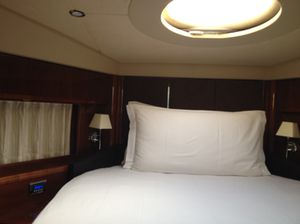 One of its two spacious cabins

Down below are two ensuite cabins. One has an oval bed that would just take two slim-line lovers, the other has an even more generous double bed. Both are made up with Peninsula linens, and bathroom toiletries are, as I expected, the hotel’s own, by Oscar de la Renta. The Champagne we are offered is, of course, perfectly chilled, perfectly poured in delicate flutes – it is Peninsula, by Deutz. There are canapés, in white china spoons. This hotel is beyond luxury. It is emotional attachment. 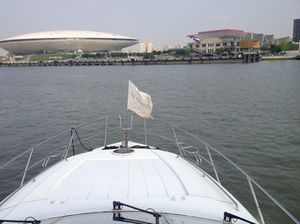 Heading to the Arena, and Chinese Pavilion

Rather than heading downstream to the ever-fascinating Bund, we deliberately sail upstream, to the site of the 2012 World Expo. I see the giant Mercedes-Benz Arena, and the red ziggurat that was the Chinese pavilion. All the while there is a kaleidoscope of water traffic passing by. There are barges laden down with mountains of sand, and others, higher in the water, with giant rolls of what looks like plastic foam. There are passenger ferries, skirting around a scarlet and white fire-engine boat. I wish I could be on for longer… next time. How lovely to stay overnight, what a fabulous honeymoon, or anniversary, or just special treat. 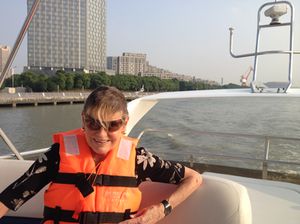 Obviously it is not needed but I inaugurate a lifebelt, Peninsula-branded of course. This luxury hotel thinks of everything! Now it is time to go ashore, to get ready for the evening…