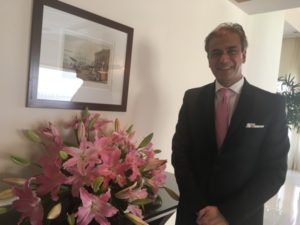 The gal can work fast, but sometimes those running luxury hotels can work even faster. The sprinters at Oberoi’s luxury hotel on Mumbai’s Marine Drive certainly showed how to pack the maximum into the minimum of time. Although the visit was scheduled merely for an hour, mid-morning, look at the snacks provided, above. The Kohinoor Suite, on the top, 21st, floor, was turned into a giant reception room. The Dimpy Menon statue which is such a favourite, a bronze of a naked woman on a seat sat as if looking at a – real – lady in a sari playing the grand piano there. 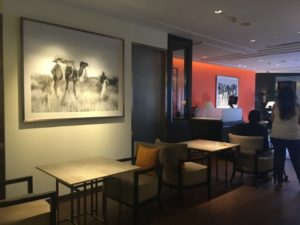 This was all arranged by regional director Devendra Bharma and the GM of this 287-room hotel Anupam Dasgupta, who really is a runner – he does the Marine Drive circuit with his trainer and some other enthusiasts three times a week. Now, the three of us did a quick sortie round the hotel to see what is new. They showed me the Capital O Club, an absolutely brilliant concept at the back of the main lobby floor. Apparently there had been a big Brioni store there but then Brioni retrenched on its India expansion so the hotel jumped at the opportunity, and have created a space exclusively for those staying in the 73 suites. 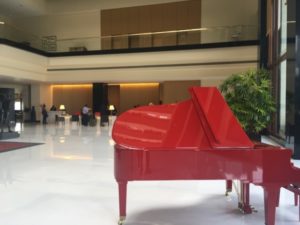 Piano in the  lobby..

It is no ordinary club. Drinks that come, on a complimentary basis, include Johnnie Walker Blue Label, and masses of single malts, including a Highlands Lagavulin 16 years old from Islay. The gin is Tanqueray and the wines are Australian, Chinkara, produced by Natasha Oberoi, daughter of the company’s living legend, PRS ‘Biki’ Oberoi. When I was being shown this spacious lounge a top editor was himself being interviewed here, which shows the versatility of the space. I am sure it does not overlap at all with the hotel’s long-standing Belvedere Club, the high-powered networking club for politicians and other powers that be, with reciprocal arrangements in other key Indian cities. 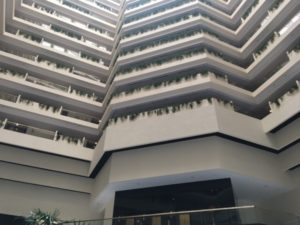 .. against the neutral background of the open atrium

This is a luxury hotel for calm and recovery, say after an exhausting trip sightseeing. There is so much art everywhere but the space is such that a red grand piano in the main atrium seems framed, as it were, against the pale grey of upper corridors. Colour is certainly important – the scarlet of the piano, the bright blue of the sari worn by the suite’s pianist, plus the matching pink of Devendra Bharma’s tie and a bouquet of orchids, and so on. I long to spend more time back in that suite.