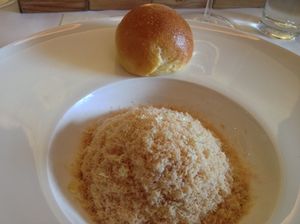 What IS this lifetime-memory dish?

Very seldom does one dish stick in the gal’s mind forever.  At Hôtel du Centenaire, Aquiaine,  Roland Mazère’s simple wild mushroom ragout dinner, with salad, was simply what was wanted after the much-missed Jean Rougié had prepared foie gras and steaks for lunch at his Périgord home. The whole mozzarella and just-picked tomatoes outside on the terrace of Castel Monastero, in the Ombrone Valley… bliss. And now another luxury hotel can submit its unique offering.  At Nassauer Hof in Wiesbaden, a signature dish at Die Ente von Lehel is, well, shaved foie gras and strawberries.  Yes, it looks like porridge, but you try it, and eat it, at home.  Take still-frozen goose liver and grate it over fresh strawberries. Add elderflower jelly, and green pepper and a salted butter brioche.  Oh wow. 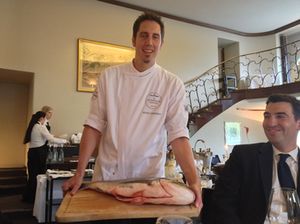 Talking of butter, the butter here is goats’ milk.  I had some kept for me, for breakfast, and it was just slightly cheesy, not smooth-cream like usual butter.  Very nice, especially with the breads that all hotels in Hesse offer (Wiesbaden is the capital of the State of Hesse).  Anyway, back to dinner.  Here we have another of this rare breed of personable, no-arrogance, no-stuffiness younger culinarians of Germany, and yes, this is a very agreeable species.  Michael Kammermaier had the difficult task of succeeding legend Hans-Peter Wodarz and, unlike David Moyes trying to run Manchester United after Sir Alex Ferguson, he has succeeded marvellously, as his ongoing Michelin star, and an always-full restaurant, testify. 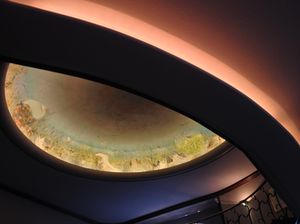 Looking up at Die Ente’s ceiling

He came out to show a seabass just arrived from Brittany, and would we like some?  We would, with vegetables, and a salad on the side.  Sommelier Sebastian Lachlan-Müller started us with a Rheingau white, 2012 Kiedricher Turnberg Riesling Erste Lage Weingut Robert Weil, and then to a Rheingau red, 2011 Tradition Spätburgunder Qualititswein Weingut Künster.  I glanced up to the ceiling of this two-floor corner room – it has a peripheral upper gallery for those who want to look down at other local burgermeisters dining at tables covered with linens so starched they look like finest paper.  The ceiling has an inset concave panel with a frieze of painted ducks, for the name of the restaurant. 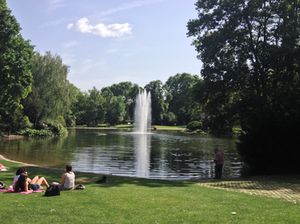 One of Wiesbaden’s many parks

Nassauer Hof, the hotel, is the centre of Wiesbaden.  This town, say the locals, is Beverly Hills to Frankfurt’s Los Angeles.  I went for a run, left along Wilhelmstrasse, turn right and up along Princess Elisabethstrasse, past ‘little houses’, wow, just like Hamburg’s Elbestrasse mansions.  This is how to live.  You have A-list shops along Wilhelmstrasse, parks galore, and an opera, a museum, a casino, kurhaus (big spa with thermal waters).  The hotel has its own thermal pool, up on its rooftop.  Since the hotel’s tag-line is ‘come in and feel at home’, I did just that, I went back to my corner suite, 123, and headed up to the rooftop, for its gym, a good back massage, and the pool. 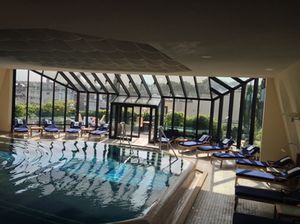 .. and the hotel’s thermal pool

This is not a pool for swimming, but for relaxing and detoxifying. Stay in 20 minutes and your troubles disappear, they say.  The water comes from a source right under the hotel that has been pouring out its nutritional liquid since, they say, the sixth century, BC that is.   Also up there, on the 150-room hotel’s top floor, is a really scientific and admirable spa, with specialised therapists, and a big gym with Pilates equipment.  The receptionists and therapists, by the way, wear multi-coloured red-pink shirts, such a change from the usual white, or brown or black. 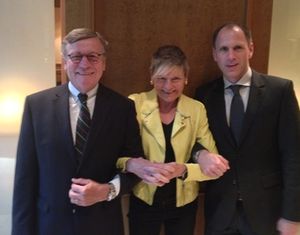 The boss of this hotel, the amazingly-young Karl Nüser, has been at this luxury hotel 37 years (yes, I found a photo of him with his predecessor, Gianni van Daalen – obviously the thermal waters are continuously energizing, I must take them more often).  The Dalai Lama, who stays here often, is rumoured to be returning for his 80th birthday, July 2015.  Liza Minnelli is also a fan, and she, like His Holiness, likes my favourite suite, 123, looking down at the statue of Kaiser Friedrich in front of the hotel.  Let us hope that all the above do not descend on the hotel at the same time.