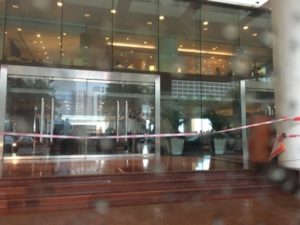 The hotel’s main door, sealed for the typhoon

At only two of the increasing number of hotel investment conferences around the world are luxury hotels an essential part of the whole event – and they both happen to be InterContinentals. InterContinental Berlin is the long-time home of the International Hotel Investment Forum (IHIF) every March, and its sibling, InterContinental Hongkong, hosts and plays a leading role at Hotel Investment Conference (HICAP) which, as always, took place October 2016. For the first time, this coincided with Hong Kong’s first Force 8 weather upset in two decades. The full wrath of Typhoon Haima on Friday October 21st, 2016, meant that the few naughty delegates, of the total 820 complement, who had been planning to fly out early could not do so, and many indeed had to weekend in Hong Kong (see the gal’s video on Haima, below). 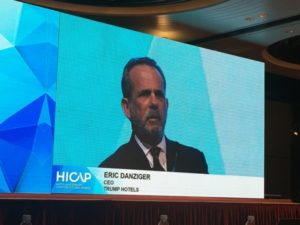 Cleverly, organisers Jim Burba (Burba Hotel Network), Robert Hecker (Horwath) and Linda Stiles (Stiles Capital Events) build ten-minute sermons into the main programme. We therefore heard Wyndham’s Geoff Ballotti on brands and loyalty, AccorHotels’ Sébastien Bazin on the digital revolution, Carlson’s David Berg on consolidation, and Trump Hotels’ Eric Danziger on talent. As always, Robert Broadfoot, Political & Economic Risk Consultancy, brought us up to date on the region – he predicts growth in racism, and generation gaps: transformative impacts of internet, yet more importance of security, and reassessment of globalism. Next, STR’s Jesper Palmqvist (see image at the top of this story) showed, throughout Asia Pacific, August 2016 year-to-date occupancy was up 1.3% but with supply up 3.4%, average rate ended down 1.5% and RevPAR was down 0.2%. 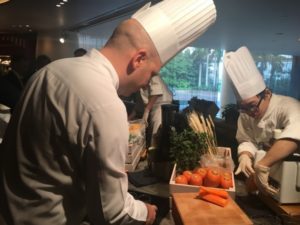 Most notable topic was cyber-security, barely mentioned before this year. I loved the panel, moderated by David Keen of QUO, on new-look hotels, which included Hong Kong-based Ovolo’s Girish Jhunijhnuwala describing how his hotels’ followers have their own radio, via Spotify. Another panelist, the charming Nagano-based Yoshiharu Hoshino, who inherited the 112-year old Hoshino ryokan resorts, bemoaned the fact that young people do not want to work in ryokans – but then they do not buy cars or houses (or travel or do anything….). Hoshino later bowed with traditional deference when accepting the Reggie Shiu development award for his new, Rie Azuma-designed 84-room Hoshinoya, in Tokyo. 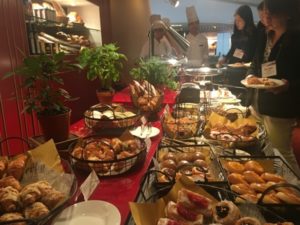 .. and one section of the accompanying buffet

Lifetime achievement award went to Minor Group’s Bill Heinecke, and young leader was Kiichi Mashita, Japan Hotel REIT Advisors. Entertainment, right through to the closing lunch, was spectacular: the first lunch was a succession of bento boxes, Japanese and then Chinese, while Friday’s, compèred by Australia’s funny man Tony Ryan in dayglo jacket and under an orange umbrella, as if sheltering from Haima, was western, with deliciously moist seabass. All breakout sessions had full-scale buffets – the luxury InterContinental Hongkong hotel’s food people must have thought we were all ravenous – and the hotel’s very generous opening cocktail was a fullscale food court of international cuisines. I have already marked the date of the next conference, October 18-20, 2017, and I suggest you do too.  NOW WATCH TYPHOON HAIMA, BELOW