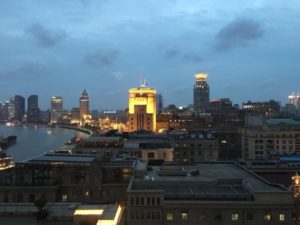 The Peninsula Shanghai never ceases to surprise. This is the luxury hotel that only a few days ago turned the terrace and grounds of the former British Consulate, which it manages (it is conveniently right next door), into a son et lumière oysters-and-cocktails welcome for the opening evening of ILTM Asia. Tonight it was dinner up in the 13th floor Sir Elly’s (original plan was to be on its terrace but the wind would have ruined any hairstyle, even Yul Brynner’s). We admired the view over the Huangpu River, looking across to Pudong. The gal heard about last night’s dinner, when Daniel Senneheiser brought along a pair of his latest-version Orpheus HE90 headphones and two guests, there and then, bought them, €55,000 each (Carrera marble case included). Tonight’s dinner, designed by Terence Crandall, featured organic, and healthy – as well as two butters, whipped here, in the hotel, there was a really addictive olive oil jam, a paste that just slipped down the throat – see them in the photo, above. 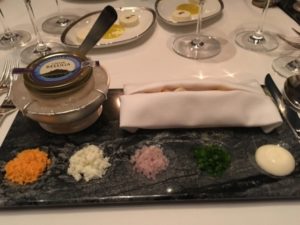 Next came a presentation of Kaluga Queen caviar from Thousand Island Lake in Zhejiang Province. A couple of months ago one of my Peninsula Shanghai friends, Cecilia Lui, had led a gourmet trip here; they also went to Cheng Jiang, in Yunnan, where truffles are gathered by humans who, even standing up, have unbelievably sensitive noses. As we processed to our own next course tonight – ostrich egg shells filled with soft poached egg, Iberico ham, anchovy and just-shelled fresh peas (as in the photo above) – we talked about the Peninsula’s own-label wines. They have had their own Champagne for some years: now the range includes a superb 2011 Peninsula Les Pagodes de Cos St-Estèphe that went jolly well with our olive oil-poached Wagyu fillet from Victoria. 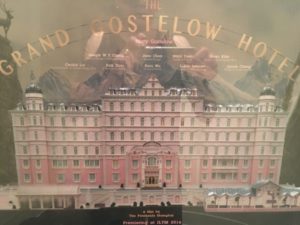 Sir Elly’s wine list of course has a Crazy Fang wine (that woman’s name seems to come up daily, it seems). I was shown a bottle of her 1246 Legacy Peak Ningxia Helan Mountain Sweet White, but generally dessert wines are for others, not for this early riser. But up in lovely corner suite 710, looking out one way over the British Consulate and the other across to Pudong, going to bed was delayed somewhat. The ultimate souvenir, in the form of a take off of the Ralph Fiennes movie Grand Hotel Budapest, stood on an easel. See what I mean about continual surprises here at The Peninsula Shanghai? I think they have a non-stop creative committee. Right now that team is planning the one-off concert, August 12th, 2016, of the Asian Youth Orchestra, playing here to celebrate 150 years of Hongkong & Shanghai Hotels, parent company of The Peninsula Hotels. 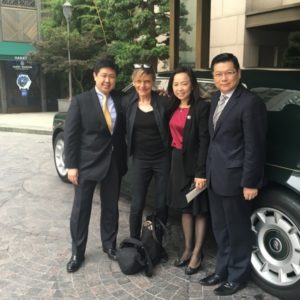 And then after that they will be getting ready for the annual all-China squash championships, held as always in a special court put up on a roof terrace – the court has one-way glass so spectators can see in, but the players are unaware of them. That same spot will host, this Christmas, a 90-foot high inflatable Father Christmas, hopefully tied down in case that wind blows. Much more immediately, however, I am getting ready at seven this morning to leave town, and goodness gracious, the nucleus of the luxury hotel’s creative and events team, namely GM Joseph Chong, complemented by Cecilia Lui and Chong look-alike Ricci Wu, are there to say goodbye.  Now see the video, below.