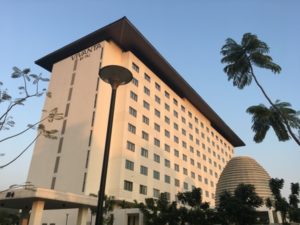 This is a first for the gal, a visit to Assam, the State that is attached to the North-East of India merely by what seems like a narrow umbilical cord: it has boundaries, too, with Bhutan to the north, and Bangladesh to the south. As of December 2015, Assam’s capital, Guwahati (guwa is the local name for areca nut trees, and hat means market) has a modern-style luxury hotel, Vivanta Guwahati Assam by Taj. It is an imposing seven floor building, its front entrance wearing a honeypot hat, 18 steps high, based on the cupola of one of the area’s many temples, Navagraha Temple, atop the Chitrachal Hills east of the city. 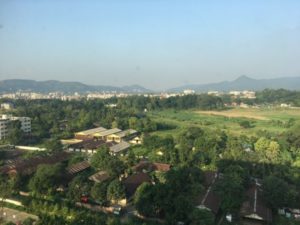 Looking down from suite 719

I was welcomed, outside the hotel, by local dancers. Inside, a young man came up holding both flowers, and a rack with an assortment of teas. Guwahati is one of India’s main tea centres: its auction house processes, or rather sells, 80% of all the nation’s teas, and 50% of the teas that are exported, and yes, even as a coffee drinker I did try Assam tea (with my room service breakfast, delivered as requested at 5.30am, but I had ordered coffee too, just in case, and not surprisingly they were unsure if I was one or two people so I got double everything else). Once in my room, 719, the Presidential Suite, I looked out, down to Brahmaputra River, and then around the suite – see the video below. 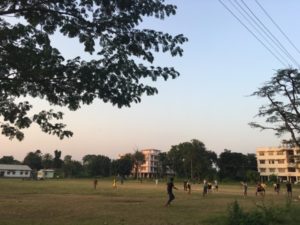 Gents of all ages playing football 200 yards from the hotel

It was Sunday, and brunch was packed, with locals taking advantage of the value. The many cooking stations, which flowed into the gardens, included big tubs of live eels, cooked to order – no thanks, I preferred the outstandingly juicy pig’s head, grilled above banana leaves. This hotel, by the way, is FIFA’s centre for the Under-17s world cup being hosted in Guwahati in October 2017. A large display board in the lobby is great for selfies, publicising the event, and the hotel, and Bollywood superstar John Abraham, owner of the local Indian Super League club NorthEast United FC. After lunch I took a walk along what is called G.S. Road, and turned right, away from the dusty hubbub of delapidated buses crowded with people, down into one of its adjacent rural villages. Sure enough males of all ages were playing the game. 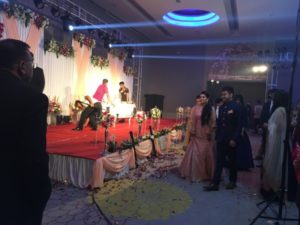 As the engaged couple process, clearing up has already started

Back at my luxury hotel home, I made full use of the 24/7 Precor gym and later met up with Krishan (KK) Aggarwal, whom I had last seen when he was GM of Vivanta by Taj Madikeri near Coorg (it was amusing to see him out of rural gear and now wearing city clothes). We ate Japanese, including excellent tempura, and then he took me to see an engagement party, being held in the hotel’s function place as well as outside on the grassy area that all Indian hotels seem to have – it was so sweet seeing the engaged couple walking around even as hotel workers quickly changed the stage set from one act to another. There are two topics of wedding conversation in India right now, by the way. One is that families not using hotels for weddings but preferring to work with cash-only freelance wedding venues are really caught out by the unexpected withdrawal of all 500 and 1,000 rupee notes. This measure is aimed at the country’s vast black economy, but means that vendors for such non-hotel events, typically paid at the last minute, cannot receive their dues. The other, and over-the-top, topic is the reputed-£60 million cost of the November 16th, 2016, wedding in Karnataka – the bride’s father, Gail Janardhana Reddy, rebuilt Vijaynagara Palace, and a temple, and the invitations were on LED screens with Bollywood-type videos showing even Mr Reddy singing.