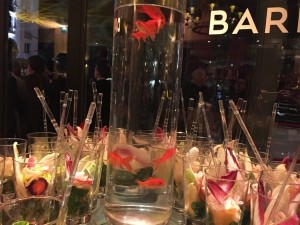 There are times for parties outside, and times for parties inside. In Cannes, first week of December, it is impossible to predict the weather. In 2014 it rained every day. In 2015 the sun could not have been more obliging, but, even so, when you are catering for over 2,000 and the party is open-ended, it is easier to control if the party is inside. As the gal has already said, every luxury hotel group wants to entertain the nearly-1,500 top travel advisors and agents who are in Cannes for the annual global International Luxury Travel Market ILTM. By tradition Hotel Majestic Barrière, which dates back to 1926, throws its own party on the Wednesday night. Everyone wants to get in, but the only hoteliers who seem to be invited are those who happen to be staying in the 349-room hotel. 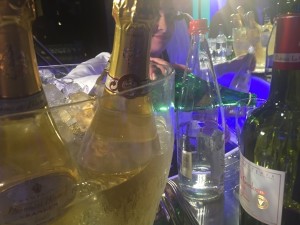 I duly put on my paper wristband and joined the line going through security to get into the party. I was there early, when they were expecting people to be hungry. All ground floor spaces had been completely cleared to provide one long party area that flowed from a seafood buffet, recognisable by goldfish swimming in tall glass tubes, fortunately filled with water, through to vertical displays of whole pumpkins studded with wooden spoons, each holding a yummy delicacy. There were pasta stations galore, and carving areas, and cold cuts and cheeses, the last presided over by skilled fromagers who were delicately cutting and portioning as though each morsel of Brie was worth a thousand dollars (Cannes residents are used to big bucks, though it was not at this hotel that diamond king Lev Leviev had 40 million euros worth of jewels stolen during a daytime heist in July 2013). 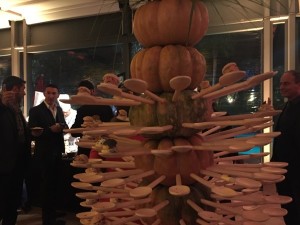 GM Pierre-Louis Renou is a born party-giver. The knowledgeable, having eaten beautifully, then progress through the hotel’s main lobby to other areas which are turned into the drinking and dancing part of the entertainment. Beautiful people, lovely frocks and other gear. I found a soul singer here, a band there, and masses of nightclub lights, and lots of people I could just about recognise in such a theatrical atmosphere. I did actually have to wonder if a large part of the travel advisor complement here in Cannes had opted for a less raucous event, like Four Seasons‘ every-night Dolce Vita evening, in an apartment the company takes over just five minutes’ walk from Hotel Majestic Barrière – I went Dolce Vita-ing one evening and, as always was oh so tempted by yet more unbeatable pasta from that great culinary entertainer, Vito Mollica, whom I had first met in Prague (he now oversees food at both Four Seasons Hotel Firenze and Four Seasons Hotel Milano). 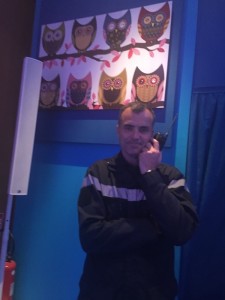 This party, here at Hotel Majestic Barrière, would undoubtedly go on almost until the sun came up but I had tomorrow on my mind. As I left I exchange a smile with one of the firemen doing security duty, and headed out into the night, for another bracing walk along to another of the Croisette‘s superb luxury hotels, Grand Hyatt Martinez.