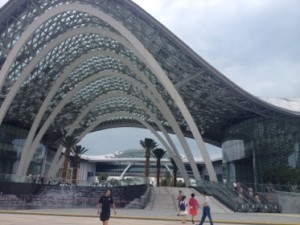 At the luxury hotel that is Kempinski Hotel Haitang Bay Sanya, the gal borrowed a first class mountain bike and, accompanied by Max-the-bellman, headed north five miles to CDF Mall, which opened September 2014.   This gigantic complex was of course planned long before the Chinese Government cracked down on excessive official spending, but, $500 million dollars later, it has opened and it is a tourist magnet for people from all over China. Why the island of Hainan, which is where Sanya is, has duty-free status despite being, unlike Hong Kong and Macau, part of mainland China, is not easily understood but never mind. 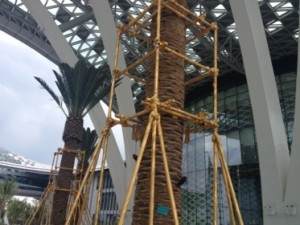 Tree supports are bound in gold

Hassell Studio in Melbourne has designed a complex that flows in curvilinear shape as if it were a modern airport. Outside it is absolutely beautiful and no wonder it is photographed thousands of times by everyone who comes to visit. Until they are mature and rigidly firm, trees are supported, but here they are wrapped in gold to show that this is a place with style, all part of the subconscious intent of China Duty Free – which is what CDF stands for – to make visitors spend when they do come here. 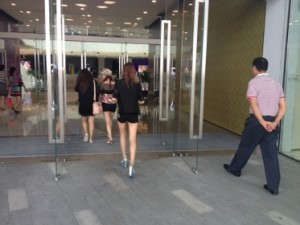 People of all ages, all body shapes, come to shop

Mainlanders are allowed to come twice a year, and spend, maximum 8,000 yuan – $1,300 – a visit. You get an eight percent discount, apparently, if you are staying at the Kempinski, which of course has a shuttle bus here (from hotels that are further away, take those properties’ free shuttles to Sanya Town, and pick up the regular free shuttle direct to CDF Mall). There are shoppers of all ages, and all builds. Judging by the legs of this young lady, she must come from Dalian, or somewhere else in the north of China. 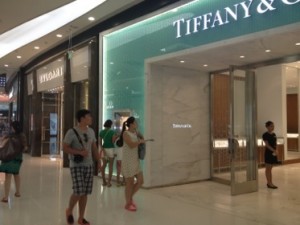 Brands are side by side

Once inside the building, it is like any high end mall anywhere, as long as it is the best – think of the Esentia mall in Almaty, Kazakhstan, connected to the adjacent Ritz-Carlton Almaty, or think of the shopping right inside The Peninsula Beijing and The Peninsula Shanghai. Here there are over 300 brands, all showing their best. Buy whatever and it will be waiting for you at Sanya Phoenix Airport (the one with outrageously large pineapples on top of the building) and if you have not got what you want this time, come back. 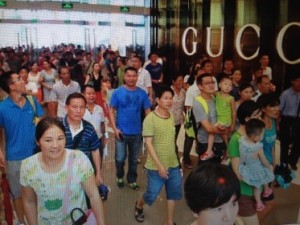 The opening day was a near-stampede

And people do. Look at the opening of the CDF Mall, which just shows the interest there is in shopping, which is good for all the dozens of luxury hotels that will be springing up, side by side, from Armani through to Waldorf Astoria, along this single section of Haitang Bay.