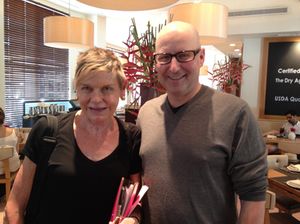 Jonathan Plutzik is one extraordinary person and the world of luxury hotels is extremely lucky to have him as a – relatively – new owner.  After an evidently highly successful career in top banking he retired ridiculously early to go full-time into philanthropy, and buying and doing up The Betsy, South Beach, fitted into his game plan.  When The Betsy re-opened in 2009, on Miami Beach’s Ocean Drive at 14th Street, it became an instant hotel with a difference, says the gal.  Yes, the four-floor building still has its original 1942 shell, designed by iconic architect L. Murray Dixon, but inside it does not seem like a hotel. 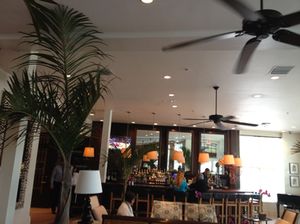 One end of the open-area ‘salon’ is bar, with grand piano and live music

Courtesy Jonathan Plutzik and his equally-special wife, Lesley, the entire ground floor has been gutted into one large salon.  Go in and you look right to a lobby lounge and beyond to a proper bar, with grand piano.  Some nights there is live jazz here.  This is a happening place.  There is a Writers Room, with writers in residence and readings and a library, and lots of poetry happening – Jonathan Plutzik’s late father was Pulitzer-nominated poet Hyam Plutzik, and every April the hotel sponsors O Miami as part of National Poetry Month.  Look left, as you enter the salon, and the space flows through to BLT, a fabulous all-day casual restaurant with Laurent Tourondel’s highly-praised burgers et al (a giant blackboard on one wall explains what wagyu is, for instance). Every meal starts with hot cheese-based popovers, and the recipe comes too. 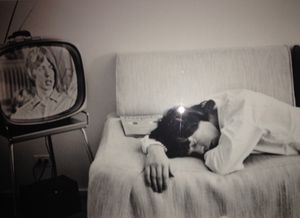 Head on up, to the 62 bedrooms – this number will, by 2016, by more than doubled as the Plutziks have purchased the Carlton Hotel, at the rear on Collins Street, and this will be added to expand The Betsy, which originally opened as The Betsy Ross in honour of the Philadelphia seamstress who is supposed to have been asked by George Washington to sew the first-ever American flag. Today, however, The Betsy is a lovely boutique-feel hotel, and its corridors are currently decorated, almost side by side, with old photographs of The Beatles and The Rolling Stones.  See this hitherto-undiscovered likeness of Mick Jagger asleep, while his band plays on a black and white television. 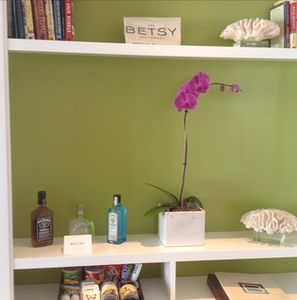 All rooms have thoughtfully-filled bookcases

The entire hotel has been decorated by the marvellously-name Diamante Pedersoli whose other claims to fame include doing up Ralph Lauren’s little pad.  Here, she has maximized the size of the bedrooms, with plain wood floors and white nearly-everything-else, walls, curtains, beds and desks.  Each room has elements of one, or at most two, colours. See how this apple-green room has its bookcase with an apple-green lining.  Every room has a collection of hardback books, and a fabric bookbag, to keep.  Buy more bags, and all profit goes to one of the Plutziks’ many foundations, this one the Zara Centre for AIDS Impacted Children in Zimbabwe (Lesley Plutzik was born in Bulawayo). 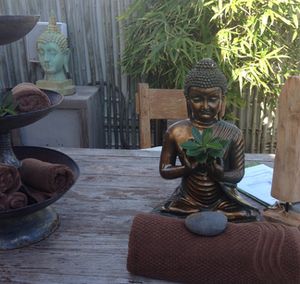 They are amazing, these two, supporting school and health programmes, and the annual LitChat festival, and the two-person Dranoff Piano Competition. The Betsy also favours  suppliers who are similarly philanthropic.  As the hotel’s lovely, impresario-like GM, Jeff Lehman. says, The Betsy is all about spreading just a little bit of good.  He believes in PACE, philanthropy, arts, culture and education. He chose Malin & Goetz toiletries, swapped the bed linens to Sferra and the coffee to Illycaffee, two other companies that do good.  But, let me say straightaway, there is nothing goody-two-shoes about this place.  It is one darn hive of fun.  See the basement B-Bar, with a rubber roof that bounces up and down, giving extraordinary reflections, when you hold a finger up.  Up on the flat, open rooftop, by the way, there is a Thai-themed open-air spa, where a special is a Betsy Moment Massage, with Honey Child aromatic oils. 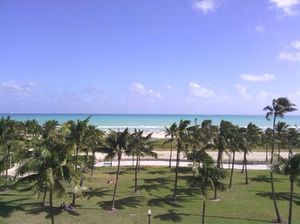 View from the rooftop

This is, indeed, an extraordinary luxury hotel, and it has all that the healthy traveller needs, including an outdoor pool and a compact gym – but I would run, I think, along Miami Beach’s renowned boardwalk.  The rooftop also has a big sunbathing deck, with bar, all reserved for hotel guests only. Look at its view.