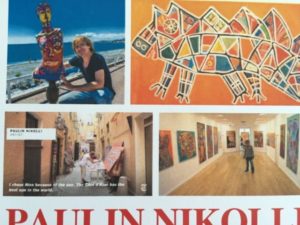 Bright art was brought in

The gal gets really excited by creativity. About 15 years ago someone had the then-brilliant idea of making dozens ofa life-size fibreglass casts of cows, getting them sponsored and decorated and placing them around Zurich. Since then Zurich has welcomed broods of bears, its city symbol, and herds of cows have multiplied around the world. One cow, Margarethe, seems to have gone AWOL (absent without leave), and placed itself in the doorway of Mandarin Oriental Geneva, the luxury hotel that Georg Rafael created. Actually there is an abundance of creativity here right now. 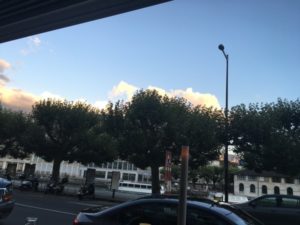 Sitting looking out at the Rhône

The hotel’s GM, Lars Wagner, says he never had much imagination until he was posted to Grand Hyatt Bangkok but now his ideas are pretty much nonstop. Before coming to Switzerland he ran Mandarin Oriental Munich, and on its flat, seventh floor roof he created first a summer-long outdoor resort, with lots of Veuve Clicquot support, and then, in winter, he had a real wood chalet hoisted up by crane, for enthusiasts to enjoy gluhwein and hot snacks. Here in Geneva he has no flat roof. Never mind. He put a small wood chalet in Cafe Calla brasserie. And this summer he has completely converted Cafe Calla into a Riviera concept, with temporary floor, yards of wispy white net, and Côte d’Azur chairs. 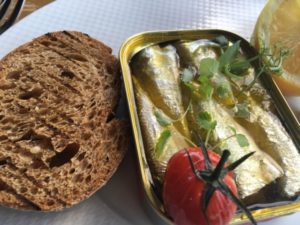 Sardines, in the can

He also has a temporary art exhibition of bright, make-you-smile works by Nice artist Paulin Nikolli. Servers wear summery overshirts, and move with that St-Tropez swagger that I associate with Cinquante-Cinq and chilled rosé (in fact we drank glasses of Bandol Dme Lafran Veyrolles Provence 2012, poured from a magnum). There were enormous lemons and tomatoes on the table. I started with sardines in olive oil, and got a whole tin, which was fabulous. I went on to John Dory fillet, with barigoule artichokes and superb spinach. Enough is enough, I said to both the server and his boss, but they were having none of it, and dessert arrived anyway, in the form of double-thick Gruyère cream and baby meringues. 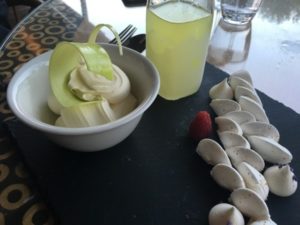 And what a lovely touch. Come here for a Riviera meal and you are offered a complimentary finale, a bottle of marvellously not-sweet limoncello. Now that is something that really REALLY excites – creativity, paired with food that is essentially full of flavour and, to end, a ‘gift’. The combination is unbeatable. When summer is over, by the way, Lars Wagner has other surprises planned – he is bringing Pierre Gagnaire here as guest-chef October 11-15, 2016, followed by Peruvian culinary sensation Diego Oka, November 1-5, 2016. I forgot to ask him what happens to Margarethe.