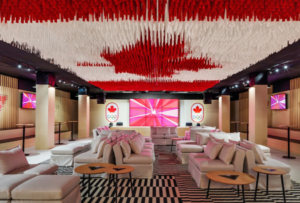 No, the gal is NOT at the Olympics – she last went to Rio this May, before all the hubbub started. She is happy now to watch it all from afar.

Little is being reported by the media about the various ‘national houses’, set up by governments as publicity as well as hospitality. Each country does it in a different way.  Denmark has a pop-up on the sand which gives free hospitality to at least 6,000 locals every day.  Qatar is supposed to have spent $8 million showing off its culture (Qatar is hoping to host the 2028 Olympics and it is said the most important Royals have been in Rio to network).

The house that impresses me, however, is Canada House.  Unlike most of the others, it is not government or state supported – its sponsors include Bell Canada, Canadian Tire and Petro-Canada.  It is also exclusive: unlike the general open-house policy only Canada’s team and their family can go in.  And it is absolutely gorgeous – look at it!  It is designed by Yabu Pushelberg, known in the world of luxury hotels for their interiors at Park Hyatt New York, at St Regis Bal Harbour and elsewhere.  Good for Canada, going for style.