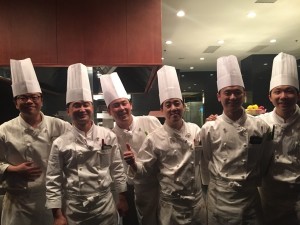 Grand Hyatt Seoul is always evolving. This is a luxury hotel which, for instance – like The Peninsula Chicago – turns a winter-time skating rink to profitable effect. The Chicago rink benefits kids’ charities. This Seoul rink, shown above, makes many happy couples love the hotel even more. After dinner in one of the luxury hotel‘s many restaurants, the young lady is, much to her surprise, led out to the rink. Under a Bordeaux burner, and with Champagne and flowers to hand, the young man pops the question, and they rush back in to the warmth. And on the culinary side, too, the hotel is, says the gal, evolving. 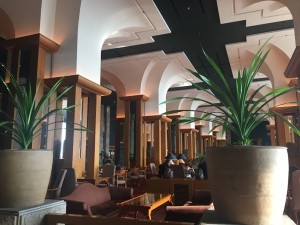 Happy chefs in the Paris Grill, shown here, know they are cooking for a packed house every night. But culinary trends change, and soon the grill will move into one of what will be four more-intimate restaurants, while the 215-seat existing Paris Grill will become a massive and elegant club lounge (like several Seoul hotels, this 601-room hotel currently has two small club lounges, left over from the days when one was for smokers, one was for non-smokers – those two lounges will become much-needed big suites). Yes, this is a big hotel, and a busy hotel. Locals rush in, coming for staycations at weekends. Since many of them live in small apartments they must be blown away by the size of the lobby. It soars up, and has massive paintings on its walls. It reminds me of a Canadian ski and activities lodge, something like, say, Fairmont Banff Springs in Alberta. 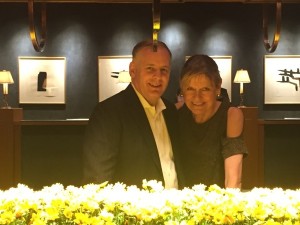 Adrian Slater, the New Zealander who runs this hotel, arrived only six months ago but he is no stranger to the city – he was GM of Park Hyatt Seoul at one time. He lives in the hotel, and he gets on jolly well with his team, which is a big one, about 800 in all. They have to look after all the usual facilities in a hotel, plus, in this case here, a 14-room spa, a 24/7 gym with two squash courts, indoor and outdoor pools, three tennis courts, and two floors of designer retail that ranges from Brioni through to Zegna. There is a deli, with bread actually baked in it, in view of customers: a hanging slate announces what breads are available at what time – at 9.30 a.m. I could buy a fruit and nut roll, a bean paste sweet soft bun, a mini French loaf, a mini kraftkorm roll, or a walnut roll. 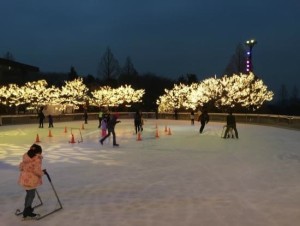 Skaters of all ages, at all levels

There is certainly lots for staycationers to do here. They might order Korean breakfast in the room, in which case they would get clam with tofu, onion and bean paste soup; pan-fried marinated beef sirloin with abalone, mountain vegetables and condiments; steamed rice with kimchi, dried seaweed and mixed salad; fruit (and, to drink, your choice of ginseng or herbal tea, or coffee). And, of course, even the uninitiated, holding support racks, want to try ice-skating when they stay at this luxury hotel during winter time. See the video, below