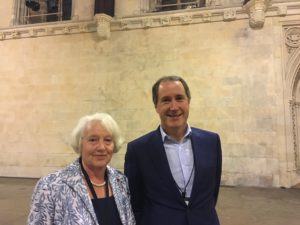 The great and the good of the world of successful and smaller brands of luxury hotels gathered in London November 3-5 2017, for the first-ever meeting of the Global Hotel Alliance (GHA) held in the UK capital. CEOs came from as far west as Irving TX and as far east as Hong Kong, about 40 delegates in all, and the gal was extremely fortunate to be invited by GHA’s boss Chris Hartley (who had flown in from Dubai) to join the party for the first evening. Everyone checked in to The Corinthia Hotel London and typically, with its GM now Thomas Kochs, there were goody bags with such essentials as umbrellas, hand cream and a superb local guidebook, Secret London: An Unusual Guide, by Rachel Howard and Bill Nash. 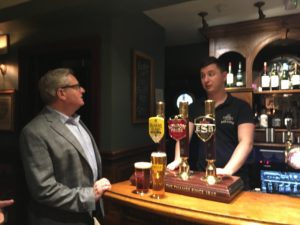 Cabinet Room of The Red Lion

First on the evening’s programme was a marvellous personal tour of the Houses of Parliament, given by a former Cabinet Minister and first female Speaker of the House of Lords, Baroness Hayman GBE PC – yes, networking is the way of life today, as we all know, and one of her four sons is a close friend of Chris Hartley. Lady Hayman is super, so warm and sharing, and she took us through the Lord Chancellor’s private apartment as well as both the tiny House of Lords chamber, which only has enough red leather seats for half the enobled, and the green-leather House of Commons (loved the glass-covered gold stationery rack, which looked as if it had been borrowed from a Versace hotel). 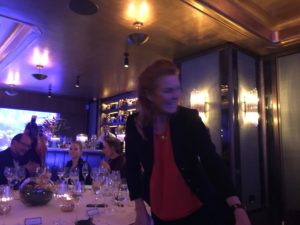 The Duchess of York…

Next came a 200-yard walk to The Red Lion, one of parliamentarians’ favourite watering-holes – there has been a drinking-place here, apparently, since 1434. We went downstairs, to the private Cabinet Room, where the bartender pulled whichever pint the thirsty hoteliers wanted. But the evening was only just starting; next came dinner in The Coral Reef Room, the private basement of Richard Caring’s phenomenally successful, and incredibly noisy, Sexy Fish restaurant. The Coral Reef Room, which is surrounded by fish tanks, was launched by Kosovan-born singer Rita Sahatçiu (Rita Ora – see a video, below) but tonight it was no less impact-ful. First, we were entertained by Sarah Duchess of York, showing off her shoes – see above – but, more seriously, explaining her highly commendable charity, Children in Crisis, and also sharing details of her new venture, tea from Rwanda. 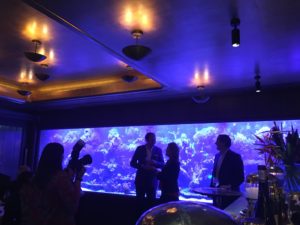 The Duchess also handed out the first-ever GHA awards. From GHA’s now-35 brands, as Chris Hartley explained, best customer recognition is currently from Alila, with best loyalty delivery from Minor’s multi-labels, and, overall, best performer is Kempinski, whose CEO Markus Semer collected his heavy glass prize against a backdrop of multi-coloured fish. Finally, of course, came the food, an exquisite set six-course meal that started with yellowtail sashimi and a side of salt-and-pepper squid and culminated with a four-chocolate and praline fondant, and the Ch Lasseque 2008 St-Emilion was superb. So, that was Friday, and after a too-short night at UltraTravel’s current best luxury hotel in the world, The Corinthia Hotel London, there was a Saturday of meetings. That hard day of work was hosted at The Marylebone Hotel London by  Pat King, CEO of The Doyle Collection, and that evening there was a superb ‘GHA Experience’ in the form of Shakespeare, West End musicals and dinner at Somerset House, built in 1547 by Edward Seymour, Duke of Somerset, who was executed five years later). AND NOW SEE THE VIDEO OF RITA ORA LAUNCHING THE CORAL REEF ROOM