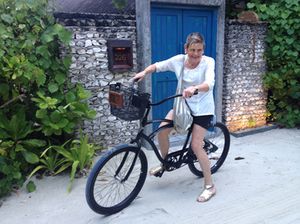 Have bike, ready to go

Well, there are bikes and bikes, and the best ones for the Maldives are like this, solid tyres, no gears to go rusty, and back-pedalling to brake. But they are jolly hard work, as the gal found at Four Seasons Resort at Landaa Giraavaru, a 45-acre luxury hotel in Baa Atoll, far north of Male. This is one that must be reached by seaplane, a 45-minute flight from Male’s seaplane terminal, to the pontoon moored a mile off the clear white sandy shoreline. It ties up to the pontoon and a resort boat, hovering nearby, moves in. You are helped off the plane and into it, put on life vest and hey ho for the resort’s jetty. There you are met, and walked between a 100-yard ceremonial guard of tall-tall coconut palms, and offered a whole coconut, with a straw in it to suck up the liquid. 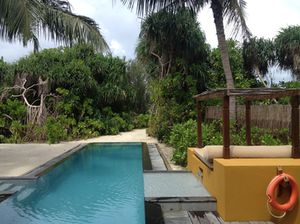 View from villa 226, over-pool to private path to beach

I am told that mosquitoes have been completely eradicated on this and neighbouring islands, thanks to a former chemistry teacher, Trudy Rilling-Collins. Working with teams of US high school volunteers she has, sponsored by the hotel, minutely searched for every possible breeding place – on islands, villagers’ rainwater butts now have net covers, here, vats of water for post-beach foot-washing are now filled with seawater. I have one such vat at my villa, 226, completely rejuvenated since my last visit six years ago. Gone are the rattans and dark browns of last century. In are soft palest-turquoise, or the colour of the shallow waters here, for walls and furnishings, and the inside of the cathedral ceiling, its rafters picked out in white. I look out of my home at a long pool, 40 feet so great for serious swimming, and completely private as there is dense pandan and magu undergrowth either side, and only a narrow and twisting path to the beach beyond. This 103-room resort – yes, another one in the B.S. Ong portfolio – is, shall we say, strong on water. 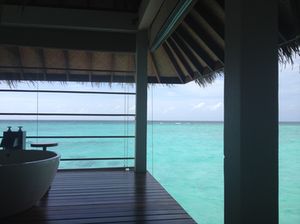 The spa has four rooms that are overwater. Lie down for a massage and, down through a window in the floor, you can see fish swimming below. Have a soak in the room’s circular tub and you look out at a variety of sea activity. Baa Atoll is a UNESCO World Biosphere Reserve, full of fascinating marine life. This is coming up for manta ray time, and, indeed, the hotel’s own manta specialist, Guy Stevens, is organising Manta Trust expeditions, on Four Seasons Explorer (the 11-person luxury yacht that jointly works with both Four Seasons here). Dates are August 21-28, 2014, and September 11-18, 2014. If you want to see the best mantas, by the way, Guy Stephens suggests these days in 2014: July 10-14, July 24-28, August 8-12, August 23-27, September 7-11, September 22-26, October 6-10, October 21-25, November 4-8 and November 20-24.

Why do mantas come at specific times? Thanks to monsoon currents from the south-west, large quantities of planktonic shrimp, favourite food of the manta, are carried offshore here, July through to October. 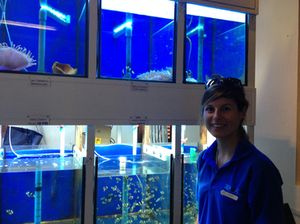 Some of the fish tanks, monitored 24/7

The people working at these luxury resorts here in the Maldives are among the most genuinely hospitable in the world. In 2001, Armando Kraenzlin, GM of this resort (and now the Four Seasons overseer not only for Maldives but also Langkawi and Bali) set up the Four Seasons Maldives Hospitality Apprenticeship Programme. This year 62 apprentices were taken in, from over 600 applicants. They arrive educated, but socially a little green – their first lesson includes shaking hands. One year later, having worked in one of the two resorts five days a week, and had specific lessons a sixth day, they graduate, fully qualified (Armando Kraenzlin deserves a Nobel prize for citizenship as the hotel also sponsors a local school and does garbage management). But Four Seasons looks after its fish, as well. I went to see the fish management programme, with thousands of babies being ‘schooled’, to graduate to the open sea. 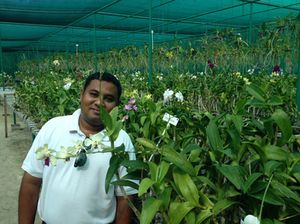 It also rears orchids, like 7,000 of them (I swear Ibbe, the orchid master, must dream of them at night). He cannot stop talking about how to rear them, how to keep them alive, how to resuscitate them, how to escape fungus and insects. Oh gosh this was a busy stay. At sunset we sat out on Seabar, on pale turquoise-covered loungers, drinking Hendrick’s, with cucumber of course, and watched the ocean turn dark as night fell. We moved to a beach restaurant, with table and chair legs sinking into the sand, and watched the boardwalk out to Seabar become dayglo blue, its night lighting on, and, lit from inside, the bar’s counter also glowing the same hue. 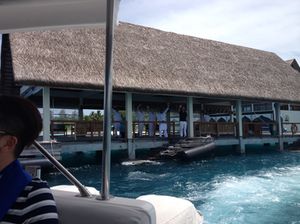 Many honeymooners do both the Four Seasons, some nights at one, then move on here, or vice versa – some also add on a three-, four- or seven-night cruise on Four Seasons Explorer. Some of these newly-weds were on my seaplane back to Male (question, why is that tiny people holidaying in the t-shirt land that is the Maldives have the largest suitcases I have ever seen? One pair had four bright yellow pantechnicons of cases, big enough to bring along all four parents too…). Anyway, I and the tiny Porsche Rimowa were seen off with ceremony. And here is a good sign of a luxury hotel. The farewellers stayed in place, waving until we were truly out of sight.