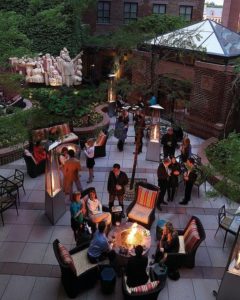 Looking down at the hotel’s courtyard garden

Anything out of doors is a blessing when the weather is not too cold or hot, or humid or smothered in smog. Washington DC in late June and early July ticks all the positive boxes, and several luxury hotels have the advantage of a Big Outside. Four Seasons Hotel Washington DC has an absolutely gorgeous garden courtyard, used for weddings, as above, and for general sitting out, having a drink or a casual meal, as left. The gal was fascinated to see just how crowded the courtyard was, after work one night. Politicos had travelled west along M Street to Georgetown. People working in Georgetown came too. And guests of the 211-room hotel also know that this is the place to be. 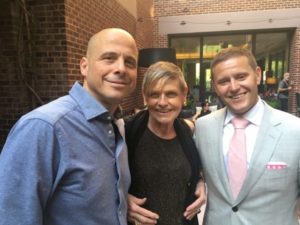 I was with the dynamo GM of the hotel David Bernand, and we met up with his new boss, Christian Clerc, who was himself the boss of this gorgeous hotel only a few years ago. Both of them, by the way, are fanatical fitness enthusiasts, and tomorrow morning they would be going on a little run, like count the miles on more than two hands’ worth of fingers. But tonight it was relax time, and let us enjoy ourselves. David, who comes from a baker’s family in north-west France, and I decided to go and try good American food – and it was interesting that he ate not a mouthful of the bread offered. 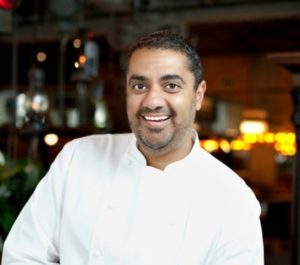 BOURBON Street is a Michael Mina restaurant, and I happen to love anything Michael Mina does. I have eaten his food in a San Francisco restaurant, packed out. I have lunched in his all-tables-taken American diner in the recently-opened Four Seasons Hotel Dubai International Finance Centre IFC (the diner with Adam Tihany’s three bashed car ends coming out of the wall). And here, in his Washington DC restaurant, leading straight off the back of the lobby, it is the same – not a table to be had. One of the biggest television hosts in the whole of the great US of A is at the next table but no-one takes any notice – after a birthday cake with two candles is taken to another table, one with a single candle is taken to his table, for his 45-year old friend. 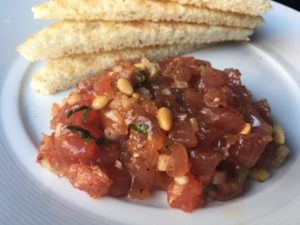 Tuna tartare had been made table-side

What is so special about this restaurant? The ambience is perfect. Acoustics are such that I can hear David perfectly, but not that big entertainer. Service is perfectly timed, and food is perfect too (for the record, I had an Ahi tuna tartare presented, and composed table-side, with ancho chile, Asian pear, mint and toasted sesame oil, followed by a massive bone-in ribeye from Leaping Waters Farm in Virginia, with mushrooms and spinach sides, and a glass of Ch de Cérons Grand Enclos Graves 2007). And when I got back up to my lovely room 336 – see the video, below, of the panorama of the room and its view – I found a card saying Sweet Dreams. A luxury hotel knows that great food and service, and a room that provides a fabulous night’s sleep, are two of the secrets to success.  NOW SEE THE VIDEO BELOW…