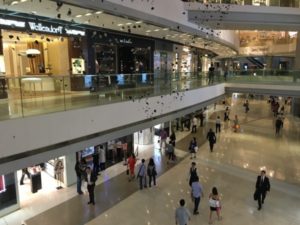 IFC mall, connected to the hotel

Flowers maketh a luxury hotel, as Four Seasons has known for so long – think what Jeff Leatham started when he began doing the flowers first at Four Seasons Los Angeles Beverly Hills and then, initially for a short time only, at Four Seasons Hotel George V in Paris. The gal finds the quickest way of getting to Four Seasons Hotel Hong Kong, on foot, is through the integral IFC mall, past its three-floor Apple Store and a massive Lane Crawford and every top brand possible. Down escalators to the hotel and its residences, and the first thing you see in the hotel lobby are beautiful flowers (the second thing, that day, was one of two simultaneous weddings, with photographs, in the lobby, being taken of the bride, in scarlet, and her attendants, all in grey). 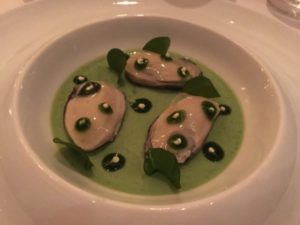 And when that hotel has Michelin stars, the gourmet is spoiled for choice. Instead of going for Lung King Heen, the world’s first three-star Chinese restaurant, we magnificently dined in the SPIN-designed Caprice, on the hotel’s sixth floor. What a treat! The working kitchen, without a wall around it, seems to take up half the overall space of the 120-seat restaurant, where about 70% of all diners are not hotel guests. Everything, that night, was to be faultless, and memorable, thanks to service led by the charming Sebastien Boudon, whose sommeliers chose a fascinating Champagne Diebolt-Vallois à Cremant Brut to start. Big caramel-suede menus were presented. Inside is an ode from Colette: ‘if one is not capable of a little witchcraft, one should not bother to meddle in the kitchen’. 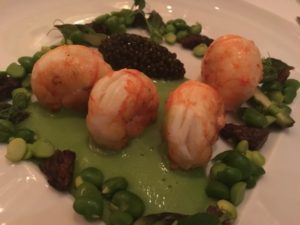 It was honestly impossible to attempt chef Fabrice Vulin’s seven-course le French Gour-May (sic) menu, so we went à la carte. Look at my poached Gillardeau oysters, above right, produced by Gerald and Thierry Gillardeau (these Pacific oysters are raised in Normandy or in Co. Cork, Ireland, and then weaned in the salt ponds of Marenne-Oleron). Here they are served, on J.L. Croquet porcelain, in a jelly base of lettuce, and a lettuce sauce is poured over – there is decoration of borage leaves, known as oyster leaves because of their taste. I then went on to another green sauce, a green pea delight poured over little curled langoustine, brought from Brittany and presented with a dollop of Chinese Kristal caviar, in a frame of bits of green peas, broad beans and morels. A glass of Gévrey-Chambertain Dme Denis Mortet was an ideal accompaniment. 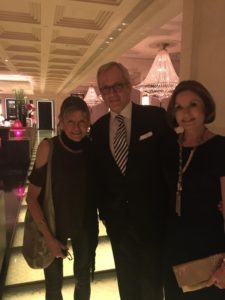 A six-foot wood tranche bearing French cheeses by Androuët disciple Bernard Antony was carried past (sorry, no room). Now as Girlahead followers know she does not ‘do’ desserts. But the pastry chef here, Nicolas Lambert – literally just returned from getting engaged to his long-time Venuzuelan girlfriend, also a pastry chef – is so completely passionate that it was impossible to say no, that night. I had a Muscovado and tonka bean soufflé, with mouthwatering coffee icecream to one side, and we talked some more about the hotel’s double staff party the previous night. Because of shifts, the 399-room luxury hotel’s 990-strong team were entertained twice, early evening and then later. Having been brought up in a diplomatic household probably meant hotel GM and RVP Christoph Schmidinger could not say no to singing and dancing, dressed in an extraordinary garment with a long blond wig, once and then twice. Hearing about it was the perfect digestif to a memorable dinner. See the Caprice video below: