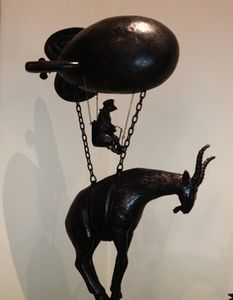 The most luxurious products, be they bags or bottles, or some’at else, weave in a little humour from time to time.  The same is true of luxury hotels, and one of the world’s supreme examples is Four Seasons Hotel Firenze.  It was time for the gal to return to Florence to see how this beauty is faring now that she is just over five. Example of humour?  There is a temporary sculpture exhibition, Carnival of Animals, showing through April 2014.  Dotted around the gorgeous reception rooms and indoor courtyards, and in the 11 acres of sculpted gardens, are animal sculptures, mostly bronze.  They are all by 37 year-old Danish sculptor Bjorn Okholm Skaarup. The piece shown will be displayed permanently in the hotel: about five feet tall, it shows a bear cycling to power the airship above him.

There is more humour in this room, an inner courtyard that has been enclosed by a glass ceiling to form a bar, with full length curtains bearing amazing Rubelli-like floral patterns designed by Pierre-Yves Rochon, who has done the entire hotel. 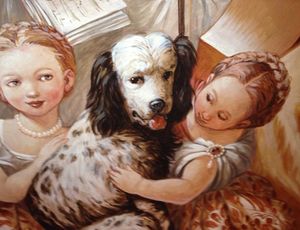 In one corner of this bar-courtyard glass vitrines hold art chess sets.  All are precious metals, gold and silver, and bronze.  One set’s pieces are all Roman gladiators, another features Russian emperors (the maker will personalise, by the way – last week a Russian wanted one of the sets, at over 4,000 euro, but he wanted real diamonds added). Next to the chess sets is a ten-foot tall screen, completely painted on each of its folds with happy folk from another era.  Two little girls fondle their pet dog. 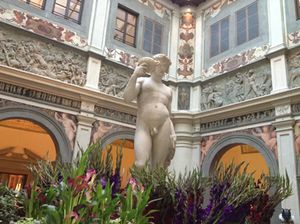 These are kind of vignettes that you see at every turn in this amazing hotel, made out of a 15th century palace in the Gherardesca Gardens that was later given, as a wedding present, by Lorenzo de Medici to his sister, marrying a Gherardesca prince. It was members of the Frantini fashion and real estate family who decided to turn it into a hotel, and thanks to Italy’s historical associations and local planning, their vision took many years to become a reality. Every area is a unique art gallery.  See this, another inner courtyard, also roofed in with glass. The upper clearstorey windows around are in fact inner-facing from first (upper) floor rooms, like 122. 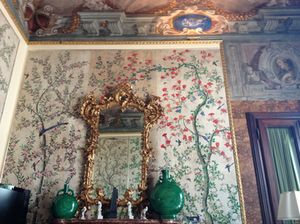 Room 122, with a narrow decorative terrace, is directly above the 116-room hotel’s main entrance on Borgo Pinti. Look through its pine-coloured damask and net curtains and you are eye-to-eye with three flags, those of Canada (for Four Seasons), the EU and Italy.  Look around the room. It is about 20 by 20 feet with an 18-foot ceiling, all of which is approached by an L-shaped corridor, past the marbled bathroom. The main room’s walls are a patchwork of floral and bird-painted parchment, marble and centuries-old fresco. Look up to the ceiling and you see a trompe l’oeil border of golden fruits acting as frame to a painting of a woman in flowing blue garb, with little putti, angels. 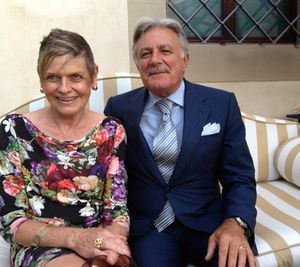 Add to this mélange elaborately gilded mirrors, and deep-pine decorative china pots, and yellow and purple orchids (real). If anyone other than Italians had attempted such extravagance – the opposite of minimalism – it would have been a disaster.  Italians can do Over The Top and not only get away with it but win deserved awards.  The Italian, indeed the Florentine, who has masterminded this hotel from its conception is Patrizio Cipollini, an extrovert who, like the Scarlet Pimpernel, appears to be everywhere, at least on campus. He discusses plans for the spa, which has its own old-style two-floor building (he wants to put in hydrotherapy). He has plans for the gym (in a twin two-floor building). He has plans for a hill, for this and that.  Watch this space. 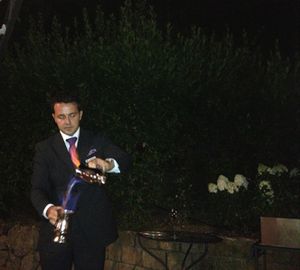 At that he darts away, scarlet glasses at the ready. Dusk is falling and the 18-inch beetles that are robot lawn movers have presumably given up for the day. On the terrace outside Il Palagio, the pianist, at a well-tuned grand piano, starts. Servers explain the Michelin-starred menu (chef Vito Mollica is away guest-cheffing at the Bangkok hotel). A glass of 2006 Tenuta Argentiera Villa Donoratico Bolgheri starts an evening which will be mainly Tuscan, say a Bollino beef salad with frisée and red pepper cream, and fried veal sweetbread and brain with zucchini flowers – Americans near us seem to be opting for the best-selling chateaubriand, carved at table.  And then another element of humour: the coffee, tea and distillation menu includes ‘tea on fire’, dedicated to Jerry Thomas, apparently a celebrated bon vivant and mixologist.  Girlahead, purely for your education, had to try this.  Darljeeling is blended with flaming rum and thrown, as they say, back and forth between two vessels. 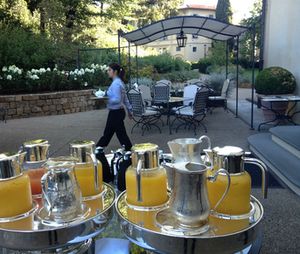 .. and the calm of breakfast, outdoors

Several hours later, I wake to look up at the ceiling lady in her blue modesty shawl.  I put on more practical gear for a run around the outside of the whole Gherardesca campus. A chic young lifeguard, in all white, including shorts that are at least two feet longer than Florentine vogue, 2013, asks me if I want to swim? The gorgeous outdoor pool, surrounded by a swarm of sun-worshippers day-long, does not open until eight but since she is there of course I can come in. After showering with Lorenzo Villoresi products, and picking up the Financial Times that they generously offer in their extensive free selection, I am back outside Il Palagio. Breakfast on the terrace includes a buffet, inside, that Girlahead’s Numero Uno smoked salmon taster says is absolutely the best, on a breakfast selection. And now to visit Gucci – and Lorenzo Villoresi himself. 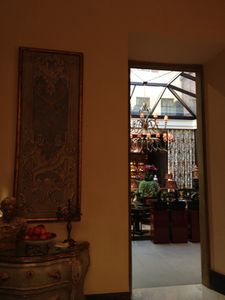 View through to one of the glassed-over courtyards

Actually I could compile quite a list of contenders for absolutely the best, here at this luxury hotel. How about the décor (already mentioned)? How about exquisite furniture that includes one occasional table that looks as if someone has left a letter on top (got you!  It is trompe l’oeil)? Include that bellman who, seeing someone going outside for a walk, asks if he would like water, and gas or flat, and ice cold or room temperature? The list must include Patrizio Cipollini, who apparently has swopped the Swiss Army bike on which he used to pedal to work in favour of a Vespa.  It must also feature the incredibly lovely staff, and the calibre of guests.  This is where you see Florentines with Medusa hair and thrown-together gear that must surely be Versace, and eternally-young Hamptons lovelies to rival Elle Macpherson. Add to this mythical best list one of the best and friendliest concierges, who happens to be a Welsh-born Australian with the patience of Job and the savvy knowledge of Encyclopedia Britannica.  OMG, it is time to go. Paul from Cardiff-via-Sydney has arranged visits to two other great Florentine institutions of style, Gucci and the aforementioned Lorenzo Villoresi… watch this space.