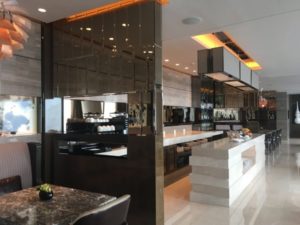 If at first you cannot make out the header image above, look again. Bahram Sepahi, one of the liveliest Iranians in the Western, and also the Eastern world, knows the exact spot at the luxury Four Seasons Guangzhou to take selfies. He put the gal’s iPhone on that spot, on the 70th floor lobby of the hotel, which is the West Tower Guangzhou Financial Centre. Above soared 30 floors, set in ziggurat style in an open, triangular-shaped building, its corners somewhat rounded. Floors narrow towards the top. The open atrium reaches up to the glass roof. A lot goes on up there, by the way. The Club, on the 99th floor, has a stunning view over the surrounding Tianhe District: when there is a view, people are far more likely to use a club facility for more than merely a free breakfast. 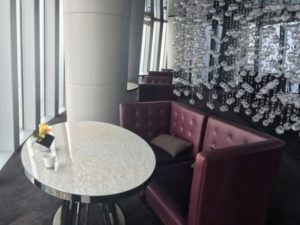 From the Club you can take a vertigo-inducing hanging-in-air staircase (25 steps in all) or a less adrenalin-pumping elevator one floor up, to Catch restaurant, on the 100th floor. This seafood restaurant is dinner-time only, apart from weekends, and on lucky days, and holidays, three romantic tables are not surprisingly booked far ahead. Each of these has a banquette for two, facing out over the city. Columns between the tables, and hanging crystals behind the banquettes, offer privacy. I am reminded of ‘engagement tables’ at Conrad Seoul, and in the top of the spire of the old Ukraina, now Radisson Royal Moscow. 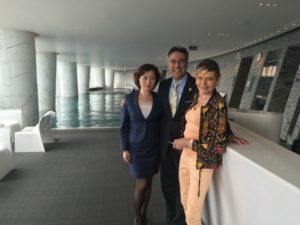 It is back down to the 69th floor for wellness, which includes an 80-ft pool, and a Technogym open 24/7 (does this contribute, I wonder, to the hotel’s topping TripAdvisor ratings? This is actually the most experienced Four Seasons in mainland China – it opened August 2012. Someone, prior to that, must have bought up all the onyx in China: elevators are lined with it, all back-lit, for maximum effect. Outside all bedrooms are standing plinths about four feet high, with two sturdy metal hooks. These are, says Bahram Sepahi, for newspaper delivery, to avoid the unsightliness, were a paper to hang on the main door, of being seen across the open atrium. 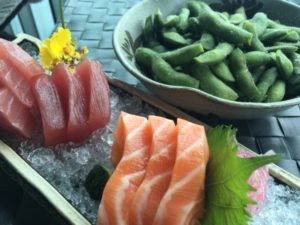 Time is running out, so we head to Kumoi, the Japanese restaurant for lunch and dinner (there is also Chinese, and all-day international, and, of course, Catch evening seafood). We start with sashimi and lots of edamame, to which Bahram Sepahi is particularly addicted. I go on to vegetable tempura, light as a feather, while he continues to wax lyrically about this hotel and its HBA design – he also mentioned Beijing and Shenzen, all of which he also oversees, together with a hotel in Tianjin that is opening ‘soon’. On the way out there is a last look around that 100th floor lobby – see the video below – and then it is into the waiting limo and on to the next place. Do, meanwhile, see the video below.