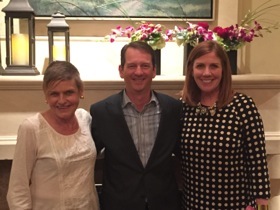 It was time, said the gal, to dine in Austin’s doyenne of the luxury hotel world, Four Seasons Austin. Despite the fact that the chef, Elmar Prambs, has, like the chief engineer, been here since the 1987 opening, the restaurant, Trio, is absolutely up to the 21st century minute. It is down 30 lushly carpeted stairs from the hotel’s main lobby. Waiting in greeting were the hotel’s GM, Rob Hagelberg, and his deputy, my dear friend Beverly Magee (and by the end of the evening Rob was a good friend too). 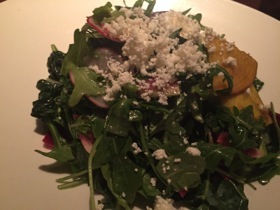 I wanted to eat local, so here goes. I started with a Republic Square salad, named for the whole-block park, between 4th and 5th Streets, that hosts local farmers’ markets. It was health personified, with arugula, kale, today’s vegetables, a farm cheese and citrus vinaigrette. This had to be followed by an Akaushi strip, a Wagyu-type meat that comes from Akaushi cattle, a pure Bos Taurus breed descended from herds in the Mount Aso Region of Kyushu Island. In 1994 due to a loophole in the trade Act of 1992 between the US and Japan, a few Akaushi cows and bulls were brought to the USA in a specially equipped Boeing 747. Today the meat only seems to be available from HeartBrand, based in Flatonia TX. 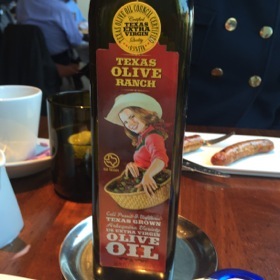 Even the olive oil was local

Even the olive oil was Texan, Olive Ranch Arbequina Variety – it went jolly well with the hot cheese popover that we were each given. The wine, of course, was Texan, Duchman Family Winery Salt Lick Cellars GSM 2011. The people serving, interestingly, were all Texan-by-choice. One server came here for a holiday ten years ago and has never left. It must be fun for everyone running this place as there are constant happenings, like Smokin’ Tuesday barbeques and Wednesday oyster shucks and daily happy hours and at least 50 weddings a year (mostly out-of-towners who come to marry outside the hotel, overlooking Lady Bird Lake. 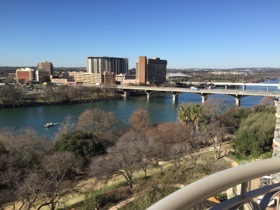 Looking down at Congress Bridge

Ah yes, that lake. This morning there are even more runners and joggers getting a bit of exercise – SXSW Interactive (South by Southwest, normally just known as ‘South By’) sees over 30,000 techies heading for Austin TX. Before I leave this extremely friendly and comfortable luxury hotel I look back down at Congress Bridge, under which I hiked last evening.   It is under that bridge, I now know, that a million and a half bats, yes really, come to camp-out every summer….