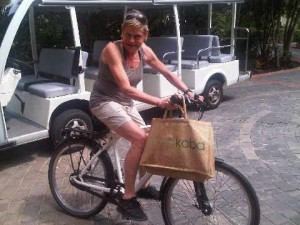 Although there is continuous buggy shuttle, bikes are best means of transport around the sprawling hotel grounds

The delegates at the first International Luxury Travel Market (ILTM) Americas who stayed at the host hotel, Fairmont Mayakoba, had an advantage – they could nip back to their rooms when a few spare moments came up.

This was easier if you were in one of the blocks near the sprawling 401-room luxury resort’s main block.  For those lucky enough to be by the sea, well, it was nearly a mile and a half hike.

There are continuous golf-buggy shuttles, and pick up’n go BMW bikes, take one whenever you see but when you drop it off, someone else might do the same (fortunately the gal’s little room came with its own dedicated bike, and a lock).

The first time I did what became a several-times-a-day furious bike commute, I spied an enormous snake on a jetty as I passed over one of the many bridges over the waterways.  It turns out it was fake, put there to stop birds stopping to have a crap. 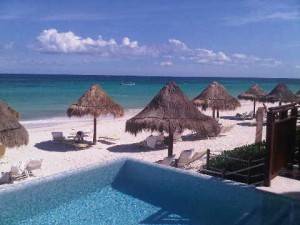 Room 904's deck, with pool, is right above the gorgeous beach

Room 904, my home for an amazing three whole days and nights, is one of the most delightfully creative environments imaginable.  Since I call a spade a spade, to me everything is a ‘room’, my space.

In fact this is a proper home, a 1,200 sq ft Ocean Front Deluxe Casita Suite, with kitchen and office: it can be connected to its neighbour, 903, to become a two-bedroom space.  Look out and this is what you see – my own plunge pool on my own terrace, from which I go down ten wood steps to the beautiful Riviera Maya beach and its fabulous warm and calm Atlantic Ocean.

Write a few articles, plunge.  Write a few more, plunge.  Like all the ‘rooms’ here, at the most colourful of the resorts, it is comfortably unsophisticated, and it would be ideal for families.  Of course there is a kids’ club, and they even have tiny bikes. 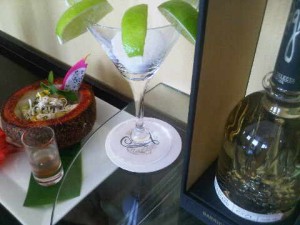 And the ocean is child-friendly. Walk out and it gets deeper only gradually.  There are no rocks below, no sudden chasms. Above, the surface is calm – surfers, you must go elsewhere.  Everything about Fairmont, with a capital F, is Friendly.

In your personal space you are constantly finding little ‘things’, like a display of chocolate fruit, and one day a hollowed-out coconut appeared filled with a fruit ceviche.  As with all the ‘things’, a descriptive card explained what it was.

At night, a card on the bed told tomorrow’s weather (hot sun) and the temperature (about 32 degrees, don’t cry for me Argentina), but on the reverse there was always a different local bird, say a brown pelican, Pelicano Pardo, which is spectacular plunge diver rocketing down from over 80 feet as it goes for fish below the surface.  It has been painted, as the card says, by one of the talented 500 employees, Roberto Espinal. 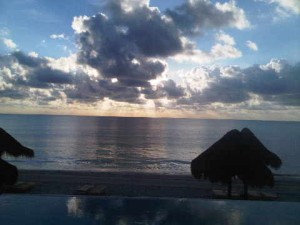 Each day was more glorious than the last.  A typical scenario was wake up, pull back the ceiling-high wood shutters and look out at the view. Exercise and plunge.  Cycle to the really excellent Technogym for its 06:30 opening – and, invariably, the young lady on duty would rush, as soon as she saw me, to hold the outer door open (how about that for luxury lifestyle service?).

Cycle back to shower.  Cycle another mile back to the main area, for the really excellent buffet breakfast (love the bran brioche, it toasts divinely) sitting on the terrace of La Laguna, reading a condensed version of the New York Times while looking out over the water. 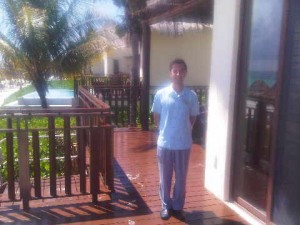 It was Ricardo Cruz, a youngster from Mexico City who just adores this particular hotel, who made my stay in 904 so pleasurable.  He is the perfect personal assistant, although he is called a butler.  He it was who found me a bike lock.  He never got in the way, but he anticipated.

I am sure it was he who put copies of USA Today (well, better than nothing!) in a green linen bag outside my door before the sun was up.  Ask him about having ILTM and he says he is so proud to showcase the hotel, and Mexico, to the world.

This is actually the third major Mayakoba ‘showcase’ this year. First, in February, there was the annual Mayakoba Classic PGA – as of 2013, this leading golf event moves to November.

Then, in March, the famous Sir Philip Green birthday party, which impacted the whole area. Over a thousand set-designers and makers were here ahead of the party guests, to build at least three dedicated venues.  Is it true that the party cost the birthday boy as much as £20 million in the end? 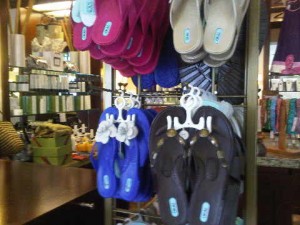 Guests at any of the three sibling Mayakoba resorts can dine-and-charge anywhere, and can spa-and-charge.  Any Mayakoba resident should head for what is a significant Willow Stream spa.

The two-floor block has 19 rooms, with private, shaded, outdoor terraces.  In the locker rooms, a personalised welcome awaits in your dedicated locker. This is not the soul-searching, bell-ringing kind of theatre but serious business for your body. Of course you start with ritual foot-washing, in a Yucatan-patterned painted ceramic bowl.

Then you go straight into your facial (love Kerstin Florian, with its 30-percent multi-acid exfoliation) or your sports massage or whatever.  Yes, come to think of it, after no fewer than five round-trip cycle commutes in one day, a sports massage sounds like a good idea. 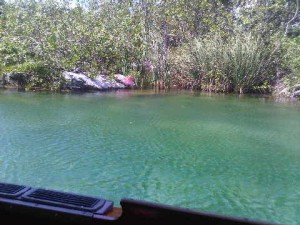 Another excellent idea is to take the complimentary hour-long eco tour that the hotel offers. As the electric lancha boat glides around the miles of waterway, in and out of this and its sister resorts, Banyan Tree Mayakoba and Rosewood Mayakoba, you hear how Mayakoba’s owner, OHL, opened up underground rivers through the mangroves.

They also extended the waterways, using the limestone thus extracted for some of the walls at the Rosewood (where, by the way, some rooftops are tiles of old motor tyres).  OHL opened up some of the sinkholes to form cenotes, cave pools.  They planted not only the grass for Greg Norman’s 18-hole El Camaleon course but also 47,000 new mangroves, and another 107 botanic species.  All this has brought new activity to the area.   There are now said to be nearly 150 bird species and up 300 types of vertebrates living here. 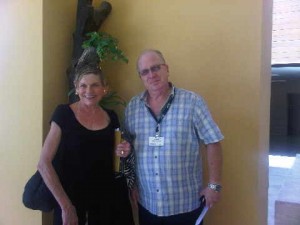 Oh by the way, what brings mammoth events here? PGA comes because of Greg Norman. The Green Party happened because Philip Green’s wife Tina brought him on a reconnaissance trip nearly two years ago.

ILTM has come because at ILTM in Cannes only last December, Manuel Diaz, the creative head of Mexican tourism for the UK, Scandinavia and South Africa, let Ian Robinson know that ILTM was thinking of doing an ILTM Americas.

As Mayakoba’s head of marketing James Batt says, if you put a brain with creativity and organisation into something, it might happen.  Ian Robinson runs the Fairmont. Hence the fact that ILTM is headquartered here.   Robinson, who was at school at Bryanston in Dorset, England, is nicknamed the captain.  And there he was, on watch, as I left for another part of the world.