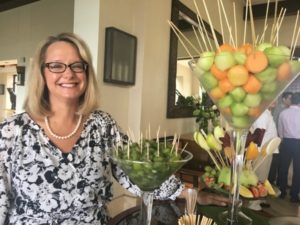 How on earth does a luxury hotel with 401 rooms cope when it hosts 600 conference delegates, plus peripheral addenda? It is even more of a challenge when those conferees are part of ILTM, the world’s most exclusive network of suppliers and buyers in the highest income bracket. Well, the gal can report that Fairmont Mayakoba, led by the marvellous Dennis Clark, manages magnificently, with more memorable moments every year. This year, arrivals were greeted by two Maya shamans (see above), and inside, in the big airy lobby, a local group played, drinks were offered and there were refreshing skewers of chilled fruit. 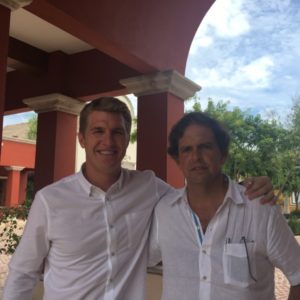 Fortunately I had arrived a day earlier, and as always there was a lovely relaxed Fairmont-ILTM welcome cocktail, with a superb buffet (under Dennis Clark and his team, the food, with input from celebrity Mexican chef Richard Sandoval, is absolutely outstanding). I was not the only one who could eat the deep-fried tofu every day, at least, for the rest of my life. Monday there was a welcome lunch for the 35 media, who this year include the Editor of National Geographic Traveler and such good friends as Mexico’s zany Deby Beard, queen of food, wine, travel and the briefest shorts on any female over five years old. The lunch was hosted by Agustin Sarasola Castill, CEO of OHL’s 1,605-acre total complex, and its three Mayakoba hotels, Fairmont Mayakoba and its siblings Banyan Tree Mayakoba and Rosewood Mayakoba, in the complex’s vibrant village square, El Pueblito, which even has a church, ideal for weddings (there are also scheduled Sunday services). 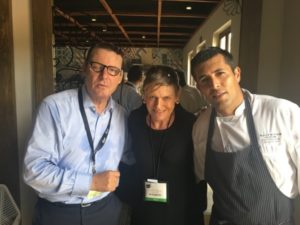 It was dine-around time, and it seemed that Rosewood Mayakoba’s magnetic culinarian Juan Pablo Loza was overseeing most of the food. Having raved about the tofu last night, now I raved again, about the open tacos spread with guacamole, on top of which were liberal amounts of tuna ceviche. Divine! There were margaritas in what are best described as topless preserving jars with handles, and beers and wine and it is quite amazing that anyone stayed awake for the subsequent Forum (everyone did). I moved on around, next to the absolutely superb Mayakoba boutique, which has beautiful leather work and embroidered bags and something for everyone. 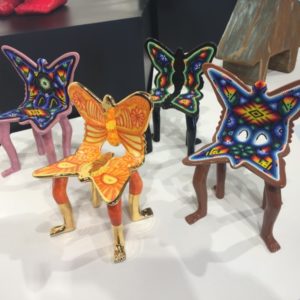 The art gallery, which was showing a collection of tiny chairs, and sculptures featuring hands and feet, wittily and with great style, was offering sushi, which was really popular. The finale, of this lunch that is, was to be a cooking demonstration, Juan Pablo Laza showing that a chef of a top luxury hotel can also turn his hand to showing how something is done, in a temperature of nearly 30°, in a pop-up kitchen in a village square (it does have a working church, by the way, with regular Sunday services, and it can do weddings). Sadly, I had to leave, so I walked back to my Fairmont home, along part of Mayakoba’s fascinating Nature Trail. NOW WATCH A GENERAL VIDEO OF THE MAYAKOBA COMPLEX, BELOW