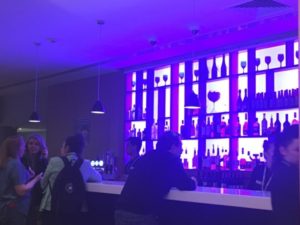 The gal has written before about the convenience and help of airport hotels – and they will be, without doubt, ever more needed. As travel numbers and flight delays increase, so there will be a growing need for somewhere handy to stay, not necessarily one of the top luxury hotel brands but well appointed and ideally as close to planes as possible. At one of the world’s busiest airports, Heathrow, planners never included any lodging connected to the original terminals, one, two and three. The hotel of choice for these terminals is what is now Park Inn Hotel & Conference Centre London Heathrow. It may be venerable – it opened in 1973 and, as with Gilbert & Sullivan’s Trial by Jury ‘she could easily pass for 43 in the dusk with the light behind her’, so the hotel, surrounded in springtime by gorgeous flowering trees, looks eternally young. 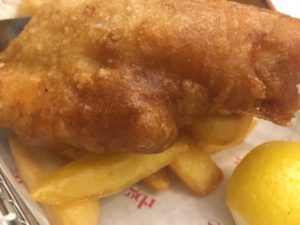 What today is an 895-room mammoth has variously been Excelsior and Le Méridien in its past, and at least one of its three spoke- type wings has even been hived off for a time as a separate product. In years gone by it had formal dining, but now it has two extremely clever concepts. The lobby has morphed into one big eatertainment centre, the Lounge, the colour behind its serving counter changing seamlessly through the colours of the rainbow. You can sit up at communal tables, at really comfortable bar stools, or sit down at coffee tables or in an orange-surrounded booth-for-two. Everywhere, there are thoughtfully masses of sockets, both European and UK. Staff from dozens of countries, including a charmer from Luanda, buzz around, in black shirts and trousers. 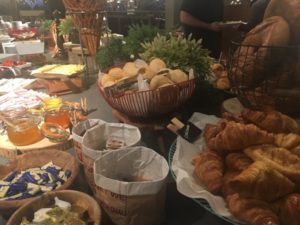 That night, we had not made dinner reservations – in a hotel of this size, why bother? But, as happened with a hotel beside the Grand Canyon (where we ended up dining off the bar’s nuts) and at the great-fun 25hours Bikini Hotel Berlin, we were caught out here. As well as having a Really Big Indian Wedding in an event space, the hotel’s RBG Bar & Grill had a wait-line all evening, but we managed to find two adjacent bar counter seats. Tajinder looked after us as if he had been an A-list butler, quickly bringing glasses of Malbec – two sizes available – and then our food. When hotels do gastropub fare well, they need applauding. The superfood salad topped with a grilled salmon extra was outstanding, and the fries with the fish and chips were just perfect, light and fluffy inside with crisp exteriors. 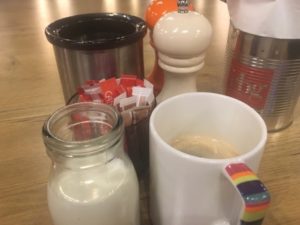 Still life on a breakfast table

Cleverly, the hotel extensively advertizes its food in elevators and public places, using simple letters, say Hearty Or Healthy, on brown card. RBG Bar & Grill serves an extended version of the bar food, with a wide selection of any two dishes for £18. We did get a table there for breakfast, which is entirely self-service, with lots of Carimali coffee, and hot chocolate and hot water, machines (the RAK coffee cups have bright striped handles). I like the rustic barn feel of this space, and, and the folksy displays, on tables, of colourful salts and peppers, milk in old-fashioned glass bottles and cutlery in tin cans. Operationally it is brilliantly thought out. First breakfasters are ushered into a far area, later arrivals closer and closer in, so that servers can thus clear a large number of vacated tables at once. They did about a thousand breakfasts that morning, no fuss. If only all designated ‘luxury hotels’ could operate so efficiently!