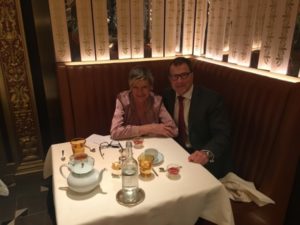 Roland Fasel in the Grill

Life constantly evolves and so too does luxury. For some, luxury is still to be flaunted – see the line-up of the blue cars, above, an array that includes a Lamborghini and a Range Rover, and all have Kuwait plates (interestingly, all the Qatar-registered vehicles the gal saw parked outside Grand Hotel Victoria-Jungfrau, Interlaken, a couple of weeks ago were silver). For others, especially in São Paulo, luxury is an anonymous-looking car, preferably with black windows and, of course, bullet-proof. But let us concentrate on one of the world’s most iconic hotels, The Dorchester. The number of hotels that do not need a location added can be counted on one hand – Le Crillon, The Plaza, Raffles, and The Dorchester. The MD of this iconic London hotel, Roland Fasel, is forever spreading that word that there is something new, and youthful, happening at this 85-year old grande dame. 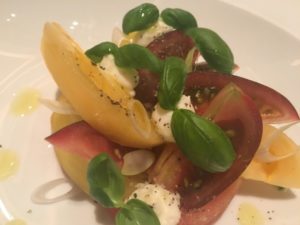 I know how old she is of course, but even if I had not, I could have worked it out. Walking round to the hotel, I passed an Uquidambar styraciflua tree, named for Sir David Tang and one of 80 trees planted in 2011 by The Dorchester for its 80th birthday. What a lovely touch. In those days, namely five years ago (but that seems like an age gone by, already) the famous Dorchester Grill was still tartans and over-the-top in its looks: now it is bronze and light, thanks to designer Thierry Despont, and the food is fabulous as always. Christophe Marleix’s take on caprese is heritage – not heirloom – tomatoes, with fresh goat cheese. 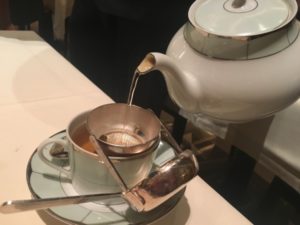 What is the difference, you gourmets may ask? Apparently heirloom is American, heritage is English, but the tomatoes are the same, ideally open-pollinated and non-hybrid. While we lunched we were brought tea from the hotel’s own bushes – yes, on the roof! The hotel is working with Wee Tea, which, as is obvious, is Scottish (did you know they grow tea in Scotland?). The first leaves have just been picked, and dried in the kitchen, and now they are being served, poured like this. At the same time, the Promenade is introducing a flower-themed afternoon tea, starting off with flower-balls of tea, put into boiling water so they open up, and then, apparently, there are flower-themed cakes. 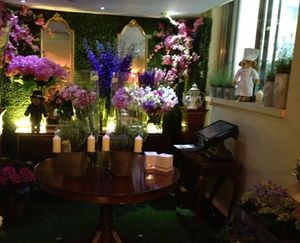 Next up will be Chelsea Flower Show, 2017, for which this luxury hotel is a sponsor. Two years ago the hotel turned an alcove of its front lobby into a flower-themed nook during Chelsea Flower Show – what will they do during the next event, May 23-27, 2017? You can be sure there will be a partnership happening with the luxury property’s ongoing Champagne partner, Laurent-Perrier, and Roland Fasel hints that some, at least, of the 26 hotel graduates he has working in various departments throughout the hotel will be serving at Chelsea. We are always looking for ways to promote the beautiful Dorchester as eternally youthful and innovative, says Roland Fasel. TALKING OF WHICH, DO SEE WATCH DESIGNER SARAH EBERLE TALKING ABOUT HER PRIZE-WINNING MEKONG GARDEN, SPONSORED BY VIKING CRUISES, AT THE 2016 CHELSEA FLOWER SHOW.