Watched by Kathrine and Tamir Kobrin, I am welcomed with rose water and a bindi

Arrive at a new place gal, you are sprinkled with rose water and you have a ceremonial bindi placed in the centre of your forehead, for good health and prosperity.  It is vermilion powder, and it is jolly difficult to get off.

The ceremony when one steps into Leela Palace in Chanakyapuri, Delhi, somehow seems to fit in well with the uber-opulence that graces every minutiae of the latest baby of nonagenarian hotel wonder Captain Nair, the Honorary Chairman (he called his hotels The Leela after his wife and beloved advisor).

This particular luxury hotel opened March 2011 on three acres in the diplomatic area of Chanakyapuri, called after an ancient Maurya advisor.  An adjacent six acres, a government-owned memorial to the late Rajiv Gandhi, is maintained by the hotel: its own lush gardens highlight a 12-foot tall gold sun-human shape, an auspicious Devi sculpture by Satish Gupta. 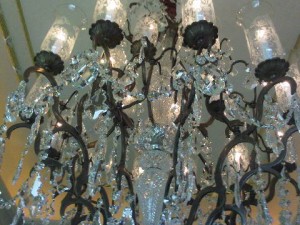 Look up - at glorious chandeliers

Gupta also did a pair of gold and pink panels in the sparkling marble lobby.  It is two-floors high, with eight massive columns and eight full-size, look-real trees. The two giant chandeliers here are real Murano, from Venice.

There are masses of other amazing chandeliers, from Turkey, throughout the 260-room hotel.  940, one of the two 1,600 sq-ft Royal Suites, has a squash court-sized really private terrace and a  20-foot plunge pool (for serious swimming, go up to the 11th floor rooftop where the 60-foot infinity pool has a long glass side wall to look down at fabulous city overviews).

But in my room I learned a quick Leela lesson. You have the best, Bang & Olufssen, Bernardaud, Bose, Bulgari White Tea and Laguiole, and bathroom supplies include towel- and also fine-cotton robes, both with matching slippers in little bags. And you must look up, as I did to my chandelier. 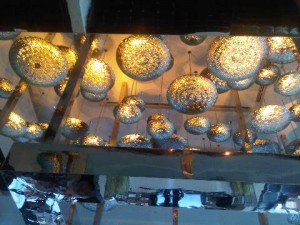 Look up at Qube's ceiling

The stripling palace looks established-for-ages but it has continual bursts of 21st century wow. In the garden is a double-height, single-floor glass cube. This is Qube, the all-day restaurant.

Look up here and you see the designers (SPIN, from Tokyo) have put up over 30 silver ‘dustbin lids’, of assorted sizes.  You can, of course, look horizontally, at young Delhi rich discussing the finer points of a buffet item with the patient duty chef.

Look out, across the ornamental garden, to the produce garden, where American Executive Chef Glen Eastman patiently grows organic produce, and where bees will produce honeycomb for breakfast, and honey to infuse into VIP sweetmeats.

Will they also add honey wraps in the ESPA spa, perhaps?  Highly enthusiastic hotel boss Tamir Kobrin is not exactly short of creativity.

An ice-like Buddha greets you at Megu

The Japanese restaurant is leased to Koichi Yokoyama’s Megu, from New York.  Go in, and good-luck water is ladled to an ice-look sculpture of the Buddha that dominates one of the rooms.

Look up, and here is one mammoth ‘bell chandelier’, scarlet lined: in another area you see a myriad of tiny earthen pots hanging as lampshades – they are red-lined, in honour of the royalty of India as well as the Japanese flag.

Sashimi, sushi, tempura and teriyaki are, incidentally, increasingly favourite delicacies of the young Delhi rich. They also love the hotel’s lush bar, with its 25-page whisky-whiskey menu, plus a 130-year old Louis XIII Rare Cask cognac, a mere $2,500 a shot (is it true a royal from Southern Africa ordered seven, last October?). 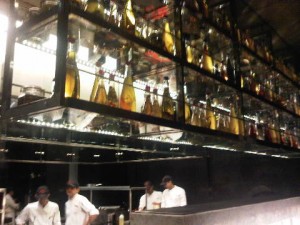 An area of the open kitchen in Le Cirque

More looking up.  This is the hotel that has given its entire tenth floor to a celebration of Le Cirque and its owning Maccioni family, apparently introduced to the Nair family by the SPIN people.

Although photos of Sirio Maccioni with such other eminences as Mayor Michael Bloomberg and King Juan Carlos and Queen Sofia of Spain grace the walls of one of the wood-panelled rooms that form the entire ‘Le Cirque’, it is one of the Maccioni sons, Mauro, who ‘oversees’ this particular outpost of the Le Cirque empire.

There are meeting rooms, and private dining rooms, and a big bar area, and outdoor terrace eating and a main dining room built C-shaped around an open kitchen.  Look up, at the olive and other oils stored above.

Le Cirque chef, installed by the Maccionis, is Mickey Boite, an Indian with a stick-up hairdo.  His father had long worked for Fiat, who relocated the family to Turin, where young Mickey developed a taste for great food. He had worked for years for the Maccionis, who thought him the obvious choice to cook here.

And the menu certainly has an Italian, rather than a French, feel.  Traditional Le Cirque classics are marked as such.  The house salad, with shaved fennel, Taggiasca olives, artichokes, tomatoes, candied cashews and white balsamic truffled vinaigrette, comes simply in a bowl. Other dishes might be listed traditionally but arrive as wow. The Caesar here is deconstructed, into an art work.

Classics are paired with Mickey Boite creations, say a Kansas wagyu Rossini with French foie gras and creamed spinach. Exotic, international and good-for-you (spinach).  This phrase sums up the Nair baby, which will co-host, with The Imperial, the annual gathering of the Preferred hotel family this October.