Back at Taj Mahal, a woman has come to pick the gal up. She used to be top driver for an all-women’s taxi service, but now works for The Oberoi Mumbai.  She is extremely skilled and totally unflappable.

She somehow steers the Audi through the hubbub and noise that is this part of South Mumbai, South Bombay.  We reach Nariman Point, I go in to The Oberoi and up to the lobby, a soaring haven of white marble, and a giant window wall overlooking the Arabian Sea.

There is a red grand piano, and a stunning bronze of a dancing couple by a female sculptor, Dimpy Menon, from Bangalore.

Before lunch begins, there are plates of parmesan bits, and olives, and breads

Oberoi has just won top customer service rating, worldwide, from the US company MarketMetrix – it gets a staggering 96.8%. The gal thinks back to that fabulous week-long cruise on the Zahra Nile Cruiser, travelling from Luxor to Aswan.

On day one, an Egyptian waiter watched what was taken from the – exquisite – breakfast buffet.  On day two he waited until the customer was seated, and without saying anything (no song and dance act) he presented a plate that was an exact photo copy of what had been taken from the buffet the previous day.

And thoughts, too, of the service in the breathtaking Oberoi Gurgaon in Delhi only a few days ago…

Is this a salad - or a hat for Ascot, Chantilly, Dubai or Melbourne?

That hotel has a unique architectural exterior.  This hotel is, frankly,  a 21-floor box, but there is nothing wrong with that.  Inside, would-be scientist Devendra Bharma runs a mighty operation.

For 287 rooms, he has 650 employees, plus some departments (engineering and telephone operations, for instance), shared with the Trident, Siamese-twin conjoined hotel with The Oberoi.

He is into simplicity, make life easier for everyone. Lunch, in Vetro, is certainly sleek. There is nothing unnecessary in the starting bread presentation.

Around the restaurant, in which Biki Oberoi (MPS Oberoi, current head of the clan) had not exactly a small part in the design, working with Vinoc Goswami, there are windows formed of brightly-coloured, Mary Quant-dress blocks of clear glass, or yellow or red.  The house salad, with asparagus, is another block of colour. It looks like a hat suitable for the Melbourne Cup.

The gal thinks back a few years to when Oberoi ran The Windsor Hotel in Melbourne (it was then the best luxury hotel in the whole of the state of Victoria…).  This was where the annual Cup was always preceded by the best champagne breakfast in town, at The Windsor, and one year the gal’s hat, a David Shilling creation, was so outrageous it topped all written, and television, coverage of Cup fashion.

The Vetro lunch, supervised by chef Vicenzo Di Tuoro from Naples no less, continued on to fusili with artichoke, and herbs from the hotel’s own organic garden.

Now since Naples is renowned for making the best espresso in the world – Howard Schultz move over, Neapolitans easily beat Starbucks in this respect – Di Touro obviously had to finish up serving a coffee.  Again, simply simple, simply delicious. 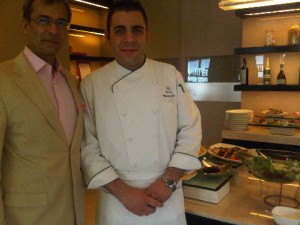 Devendra Bharma chatted about another of the restaurants here, Ziya, run by London-based Vineet Bhatia.  No problem that he is so far away, says Bharma (how many other family names start with BH, have six letters total and finish with A?).

Bhatia has a CCTV closed-circuit camera working real-time in the kitchen here in Mumbai.  He in London also has daily emails with his guys here, and there is a regulatory weekly update briefing, plus he, Bhatia, comes to see him, Bharma, five times a year, for at least a working week.