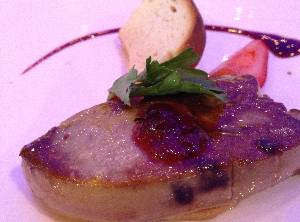 Foie gras in the main Restaurant of Silver Cloud

Special dining, in luxury hotels or such restaurants as any run by Wolfgang Puck, is particularly memorable.  The Chinese, anywhere, like private dining rooms leading off the main restaurant – the gal hates this, she likes to see what is going on (not because she wants to be seen).  Even Silversea offers special dining.  As well as the main Restaurant, which is great, there is Italian in La Terrazza, and fine-French in the Champagne Room. 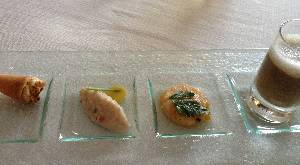 Amuse, to begin the Champagne Room dinner (foie gras cornet to the left)

This, for the sake of Silversea aficionados, has been re-done, or at least on Silver Cloud.  It is now an elegant salon with wood floor and big windows giving excellent ocean views, especially when the days are long.  There were three tables taken the night we dined there.  The table was set with finely pressed linens, and Zeher Porcelain, and cream drinking tumblers.  Butter was in silver containers with top-hats over.  Aziz Inegmirs, from Morocco, is maitre d’ and dances round the room as if he were Fred Astaire. 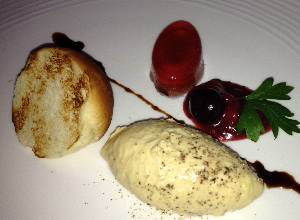 Foie gras mousse at another meal

There are multi courses, with several dishes to choose from at each stage.  This was my meal, which came after a fifth of a bottle of Dom Pérignon 2003…. The amuse, from chef Rudy Camba, was a tiny cornet of foie gras, and a medallion of lobster, and a scallop, and a mushroom-soup tot glass.  Aziz Ingemirs suggested the house wine, a Pouilly Fumé, and a Cabernet Sauvignon from Napa Valley, by Irony.  Both were just right for what turned out to be, for me, a foie gras evening. 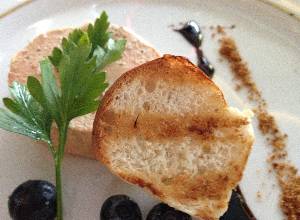 Cold foie gras terrine in the Champagne Room was followed by …

Well, nothing could beat a lunch with Jean Rougié at his house in Périgord, near Cahors, about ten years ago.  Jean Rougié, le papa of foie gras, personally prepared the lunch, around the terrace top pool of an ages-old stone house.   First came the just-seared foie gras, then on to enormous Limousin steaks, and cheese.  That night, back in our hotel, all we could all manage was a mushroom mélange.  Tonight, however, we were in Rudy Camba’s hands.  I started with his marbled foie gras terrine, with sweet exotic spices, and went on to his hot foie gras from Rougié, with a forest berry compote and fresh blueberries. 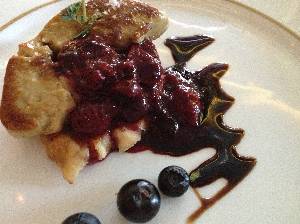 There is nothing like going out on a high, even on the high seas.  After the foies it was time to switch, first to a perfect risotto with real gold leaf on top, and then a whole baby Dover sole, served on the bone – so much more civilized than having it filleted for you as if you are ten years old.  Finally it was time for the dessert, which was soufflé Grand Marnier, which my neighbour said was almost as good as the one she makes, to which I replied it was actually the best I have had in ages, even in anyone’s home.

… and then by gold leaf risotto

Girlahead’s tips for special dining experiences like this include yes, do it once, so you know what it is like.  It also makes you appreciate the mainstream dining all the more. Back in the main dining room you do not feel you have to be on your best behaviour the whole time.  Plan to dine with people whose company you really enjoy, and those who eat at about the same speed as you (chefs, even Michelin-starred, gobble up food as if they are suction machines – and, at the opposite extreme, it is painful eating with anorexics or such international travellers as… no, no names mentioned).  And do dress up, even too far up.  You will get even better service, even in luxury hotels.