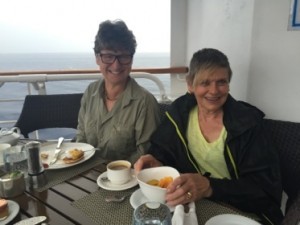 Every day crafted by the ingenious Silversea expedition people on board the floating luxury hotel that is the 61-cabin Silver Discoverer, here in Japan, is unique. Today, enroute to Yakushima, the gal woke up to a mighty gale and rainstorm. Would it still be possible to breakfast outside? Yes it was. Two intrepid Englishwomen crammed into one of the two corners of the fifth deck terrace that was not like a power shower. Across the deck, two equally adventurous male expedition people crammed into the other fairly dry spot. We waved across to each other as Lionel and the other servers heroically braved the elements to bring our hot dishes, and another cup of Americano. 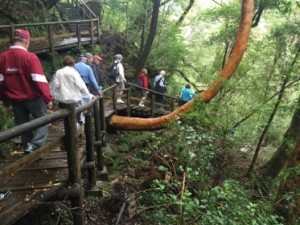 Yakushima Island is the wettest place in the whole of Japan, with rain on over 360 days a year. Today did not disappoint, but it did relent when we disembarked into buses, while we walked the forest and, an hour’s journey back down, as we made our way back onboard. The 13,000 who live on the island, who exist on fishing and tourism, must carry umbrellas the whole time. From a naturalist’s viewpoint, Yakushima is unique for its unspoiled forests, including the 3500-feet altitude Yakusugi Land, Japan’s first UNESCO World Heritage Site. We set off, on an hour-long Kobana trail along well-maintained boardwalks, with our superb French guide, a botanist who only moved here February 2015. The oldest tree on the island, she said, may be anything from 2,500 to 7,000 years old – its hollow centre means ring dating does not work. 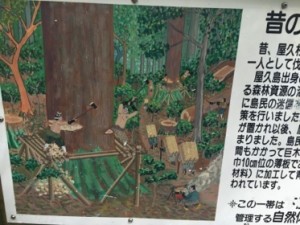 A sign shows trees being cut, in days past

Yakushima’s celebrated sugi trees are all named, Futagosugi Cedar, Hahakosugi Cedar and so on. The oldest we saw was 1,800 years old, the Buddhasugi (Buddha) Cedar, so called as apparently the 65-foot tree looks vaguely like a Buddha (personally I thought one profile looked more like Winston Churchill side-on, as in the Winston Churchill Suite at La Mamounia, Marrakech). This tree has become host to others: growing out of it are himesyara, soyogo, sugi, shikimi, tsuga and several other species. Many visitors come here for serious hiking, but the island is also popular for biking and, down by the coast, water sports and birding. There are no birds up here, in the mountains, as there are no insects for them to feed on, and there are no insects as the waters are so clean, and rush so fast that they do not pick up minerals or larvae. 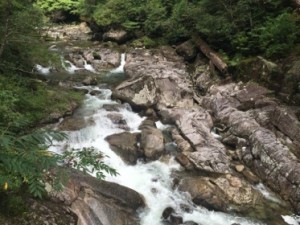 A river makes its way through harsh granite landscape

The land is granite and, walking across solid metal suspension bridges that are part of the Yakusugi Land trails, we look down at massive granite boulders. Another deer, just as at Miyajima, waits as we get back in our bus, for the hour-long drive back down to our luxury hotel, the good ship Silver Discoverer. We pass several groups of macaque monkeys as we go. This afternoon we will have a talk on plate tectonics and Japan’s position in the Pacific Ring of Fire (did I mention that there is something to do every living moment when you are ‘expedition’ cruising?).