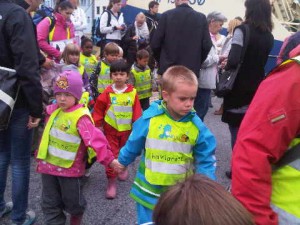 A line of kindergarten kids at Alesund

A day off ship, on land today, and we are entertained by the infant school kids of Alesund.  Not only are they orderly and neat as they walk but they show the growing ethnic diversity of this city.

Of the 45,000 inhabitants, how many are still the blond-hair, blue-eyes that one associates with Norway? Here the crocodile of youngsters includes dark skin, from many countries.

Alesund must be one of the most prosperous cities in Europe, with an unemployment rate of 2.2 percent.  It is the headquarters, the gal is told, of Rolls-Royce marine division worldwide, and the base for Norway’s furniture making and shipbuilding. 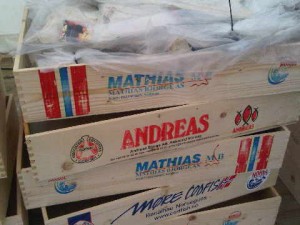 A stack of boxes of cod in the outdoor market

Known as the adventure capital of the fjords, Alesund is also heavily reliant on fishing – crew can make $100,000 a year and captains twice that and since they are so ruled by quotas they may only work part-time.

The rest of the time they are probably slumming it in luxury hotels on the Mediterranean or, like our taxi driver back in Tromsø, in Thailand.

Take a walk through Alesund outdoor market and you see stacks of dried cod, and lots of gravadlax and other salmon, and jars of fresh berry preserves, and home made cheese. 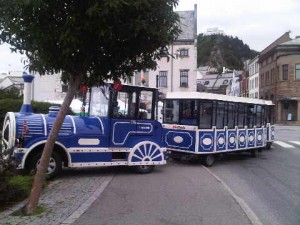 A train takes tourists around town...

They like tourists here, and a small road train is ready to take you up to Fjellstua lookout.  There, at the top of a steep mini-mountain about 700 feet high, is a lookout with café.

The lazy take the train, the fit walk.  The written guide says it is 418 steps to the top but it depends how many steps one allocates to a ribbed wood board that, near diagonally, covers part of the way.

Coming back down, I counted 430 proper steps (allowing one step for that board) but there were optional deviations. 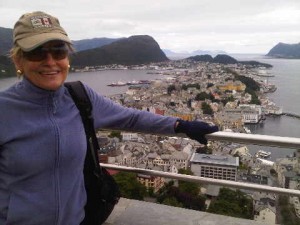 .. but you can climb high above town for a great view down,

Look down from the top, across a snake-like canal that gives Alesund (‘eel-inlet’) its name.  You see, even from a distance, uniformity of pattern.

The entire city is built in one, Jugenstil (Art Nouveau) style.   This is because, on January 23rd, 1904, the entire city-that-was, an accumulation of wood buildings, burnt in one, 15-hour inferno caused by a knocked-over hurricane lamp in the middle of – a hurricane.

The city was rebuilt, by 52 young architects all doing what was then the latest style, hence the common building style.  It was re-born thanks to insurance, and an association formed by the construction community. 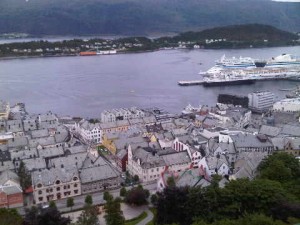 .. and in one direction you can just see the tiny, stylish Silver Explorer in front of a massive apartment-block mega-ship

It gave three years’ work to Norway’s builders and suppliers. The government decreed that no wooden buildings were thereafter allowed in any urban centre, so the new town was all brick and stone.

Even the most luxury hotels (well, today they are no-star, or one star at most) have elaborate decoration, in the style of the original metro underground stations of Paris and Vienna, and Gaudi and other architects working in the early 20th century in Barcelona.

The frescoes on walls of public areas of the Hotel Scandinavie, run by Rica, are especially sensational. 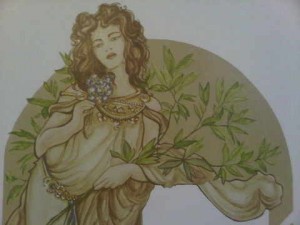 One of the 1904 frescoes in a mundane hotel

Pride of Alesund’s treasures is the pharmacy, which ran as such until the 1980s.  Now the ground floor store sells souvenirs, with a strong-coffee-and-cake snackery behind.

Take the ‘time machine’, an elevator that seemingly rushes you back past Mrs Thatcher, JFK, Nixon, Hitler and World War I to deliver you in a screening room for an extremely well-done multimedia presentation of the 1904 fire and subsequent rebuilding. 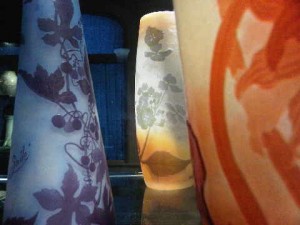 In upper rooms, look at such treasures as the pharmacist’s dining room, with its gold-leaved-flocked scarlet wallpaper from Japan, and 18 hand-carved chairs around.

There are old posters, including one for a Munch exhibition.  One of the vitrines holds a priceless collection of Jugenstil glass.  Others gleam with silver pieces that look, well, almost Charles Rennie Macintosh. 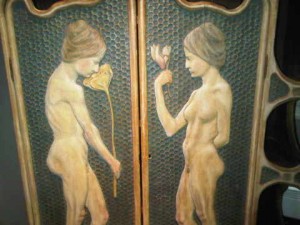 There are urns showing graceful figures, and a pair of naked beauties appear on a folding screen.  Outside, although it is mid-summer, there is nothing like nudity.

Anoraks are the order of this August day but who cares?  A perennial overhead coverlet of mist is better for the skin than that searing sun of Benidorm or Botany Bay, and anyway no intelligent person boards a luxury cruise ship for the weather.

We awoke this morning by the way, to find moored only 20 feet from us one of those ‘monstrosities of the seas’, this one a German vessel which subsequently disgorged, as if expelling whales, over two thousand passengers.

How we love Silversea for its compact size, intelligent passengers and lovely staff.  Now I have to find a way of kindly saying to our lovely butler Dinesh that no thanks, it is awfully kind of him to suggest a special Indian dinner in our cabin but we would rather dine, yet again, in the main dining room.